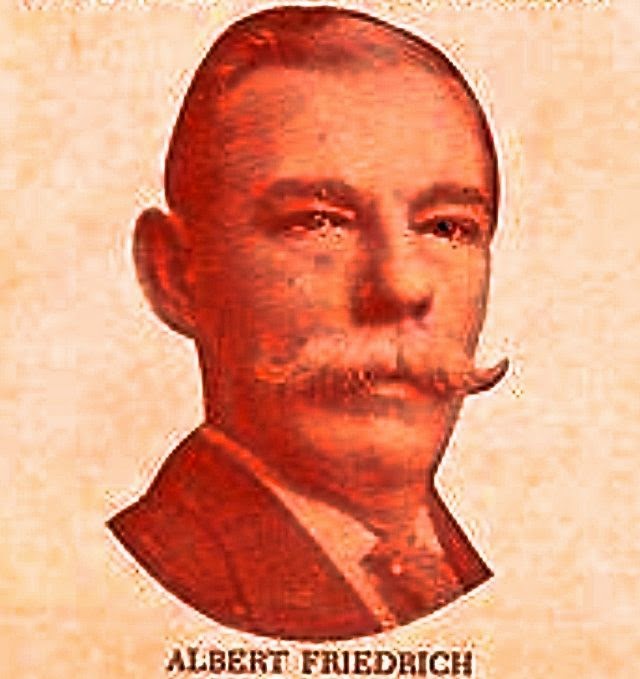 The distinguished looking man here was known to his contemporaries as “The Horn King of San Antonio.”  The title would not have bothered him at all since he had built his thriving Buckhorn Saloon business there by displaying of hundreds of antlers and cattle horns — a fixation from his youth.  They proved to be “horns of plenty” for him before and even after prohibition in Texas shut down his liquor business. 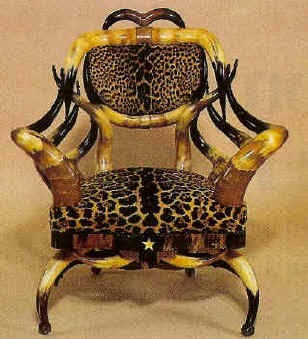 His father, Wenzel Friedrich, and mother, Agnes Urbanenck, were both immigrants from Bavaria, Germany.  Albert Friedrich was the youngest of their five sons, born in 1964 in San Antonio, the town in which he would live his entire life.  With the emphasis German emigres put on education, we can assume that Albert got as much good schooling as was available in Texas at that time.   Even as a teenager he is said to have been “hooked” on horns.  A contributing factor may have his father’s reputation as an award-winning furniture maker, specializing — strange as it may seem — in chairs made from cattle horns, as shown here.  His clients are said to have included Queen Victoria, Otto von Bismarck and Kaiser Wilhelm I.

Whatever the impetus, by age 17 Friedrich was well on his way to a large collection of antlers and horns, some acquired through his own hunting trips.  By the time he was 26 years old Albert was working behind the bar at the Southern Hotel in San Antonio, a popular watering hole for cattlemen.  About 1871 he opened his own small saloon across the street from the hotel.   Some reports say he called this place, “Buckhorn Saloon,”  but others are not sure.

All are agreed that at this Dolorosa Street location, he began to decorate his establishment with deer antlers and cow horns.   With the cowboys, hunters, trappers, traders and other members of the public who frequented his place, Friedrich made a deal.  Bring him a horn specimen and a drink was on the house.   About 1890 he is also said to have purchased the head of a seventy-eight point buck for $100, worth more than $2,000 today. 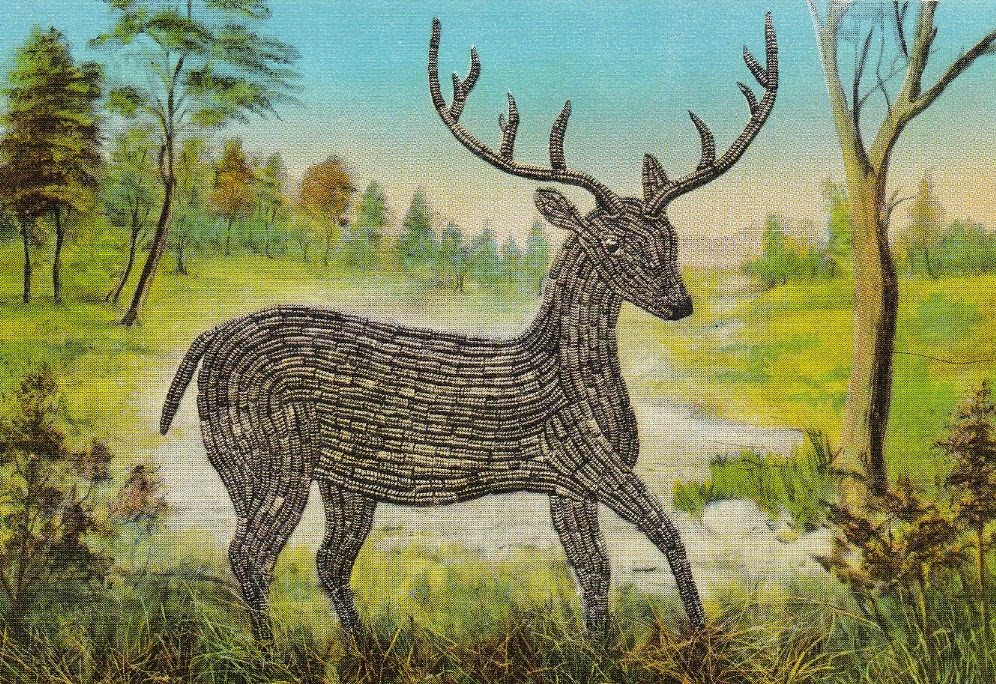 During this period, Albert met the woman he would marry; she was Emilie Helen Derr, like him, a native born Texan.  The 1880 U.S. Census found her at age 16 living with her parents, Henry and Wilhela Derr.  Her father was a baker.  About 1890 or 1891 Albert and Emilie wed.  Although their union produced no children, Emilie had artistic abilities.  The two hatched an idea to provide free drinks to those bringing them rattlesnake rattles.  The effort was a success and the accumulating of rattles allowed Emilie to fashion the deer figure shown above, still another decoration for the Buckthorn Saloon.  Friedrich also was using bar tokens as a way of enticing customers in the door.  Appropriately two shown below have antlered animals on them. 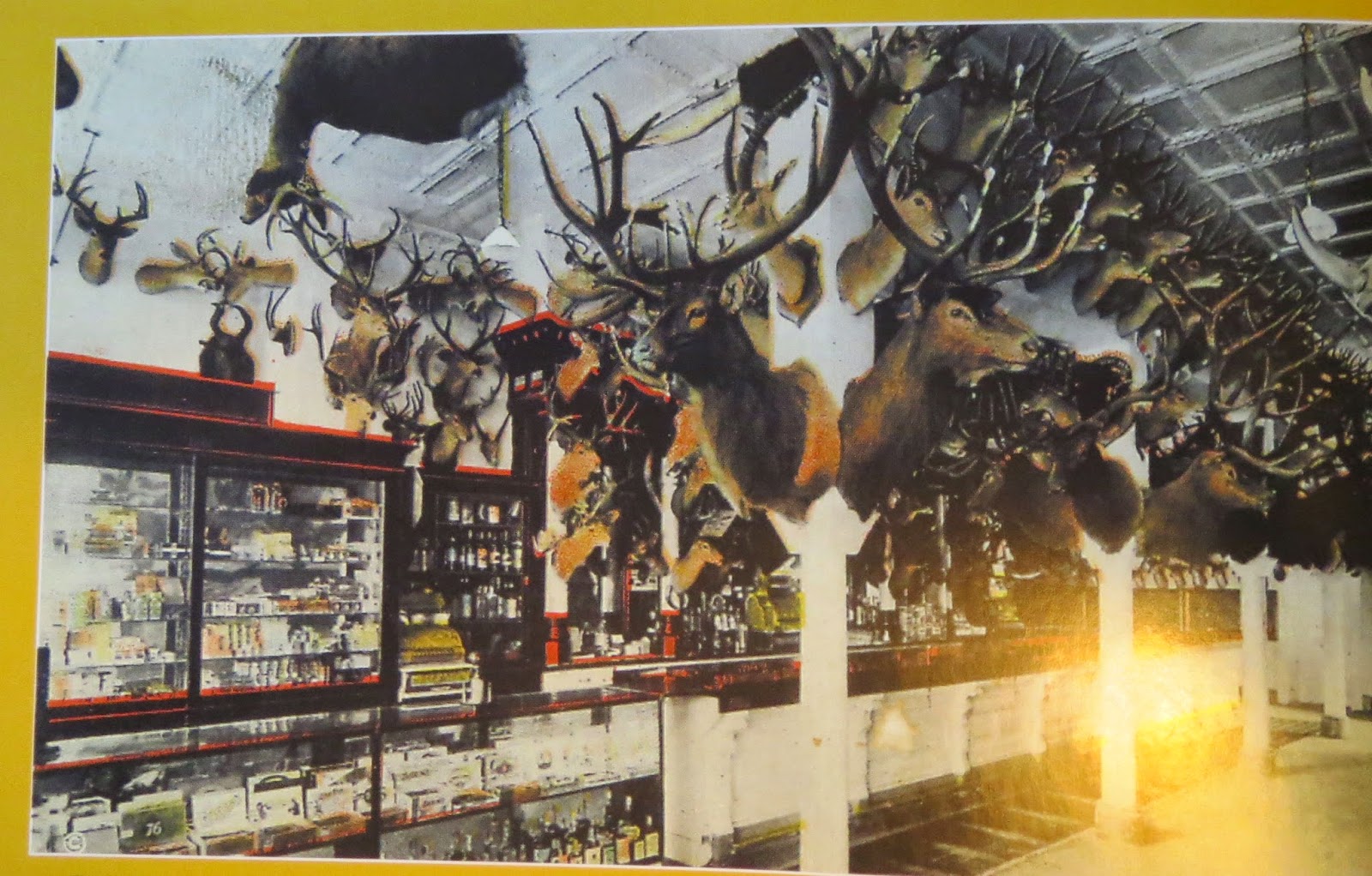 In 1896 Friedrich  moved to larger quarters in a building on the corner of Soledad and West Houston Streets.   There in a saloon he definitely called “The Buckhorn,” he installed his assemblage on what appears to be every surface available.  Shown here, above and below, are images of what Friedrich’s saloon looked like.  The photo on top shows the cigar counter, a fixture in most saloons, a well as a glimpse of the bar.  That feature is shown to better effect on the postcard below.  In the midst of the proliferating horns and antlers stands Albert himself, the genial publican, erect in front of an appropriately gold cash register. 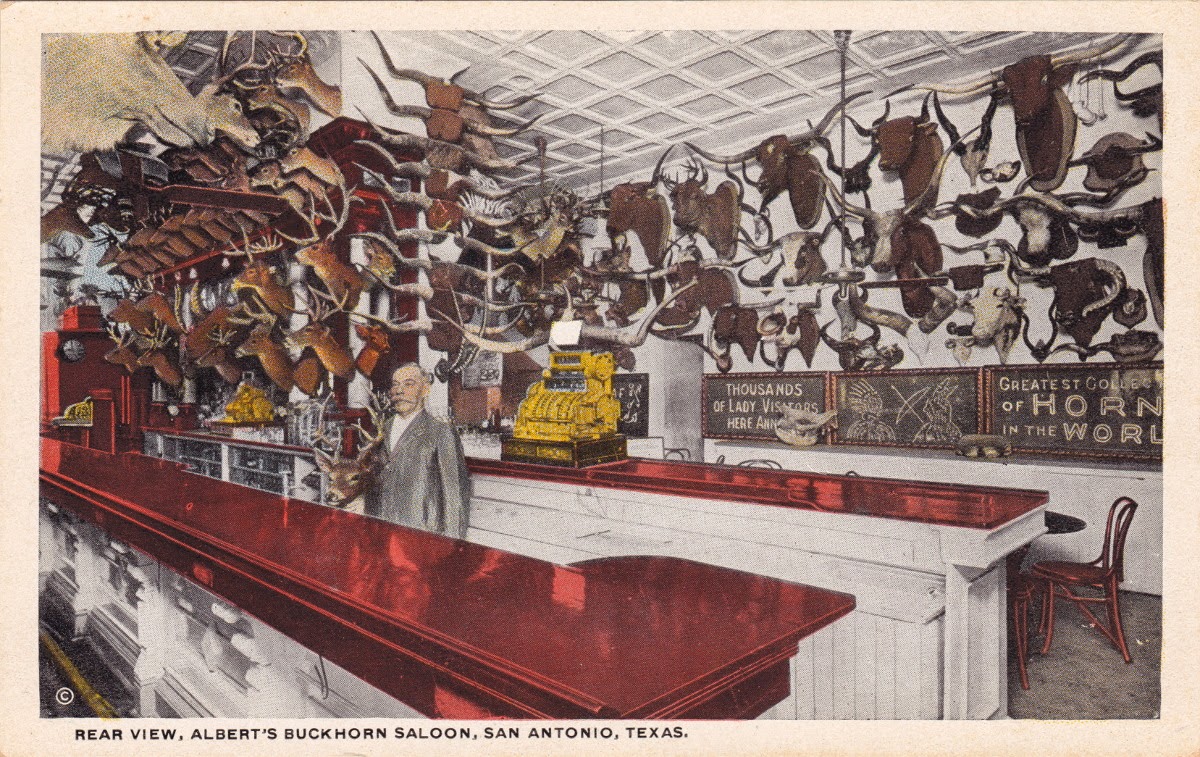 Throughout this period, the fame of Albert’s Buckthorn Saloon traveled widely.  In 1898 when Col. Theodore Roosevelt and his Rough Riders were stationed in San Antonio preparing to go to Cuba during the Spanish-American War, they visited the drinking establishment.  Friedrich’s father is said later to have made a chair for Roosevelt.  Will Rogers, the American humorist, also is reputed to have had a drink there. 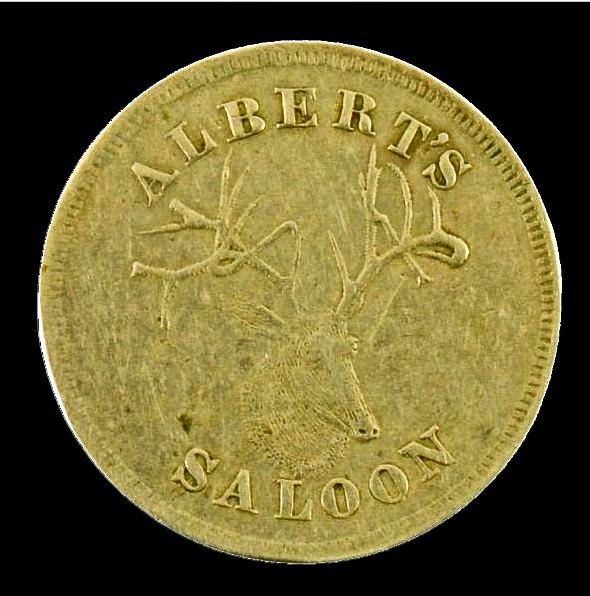 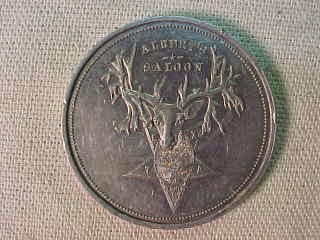 In addition to a proliferation of horns, customers also could view other mementoes of the “Old West’ collected by Friedrich.  One writer described it as “this massive assemblage of Texas-style stuff.”  It included dead animals and animal parts from around the world, including a stuffed baby giraffe.  There was a bottle cap collection and a large Indian chief silhouette imprinted in a piece of metal with a .22 caliber rifle.  Friedrich also owned a famous firearm, a shotgun belonging to the notorious Western killer, John Wesley Hardin, and allegedly used by him to kill Jack Helm, the sheriff of DeWitt County, Texas.  Hardin himself was gunned down in an El Paso saloon in August 1895. 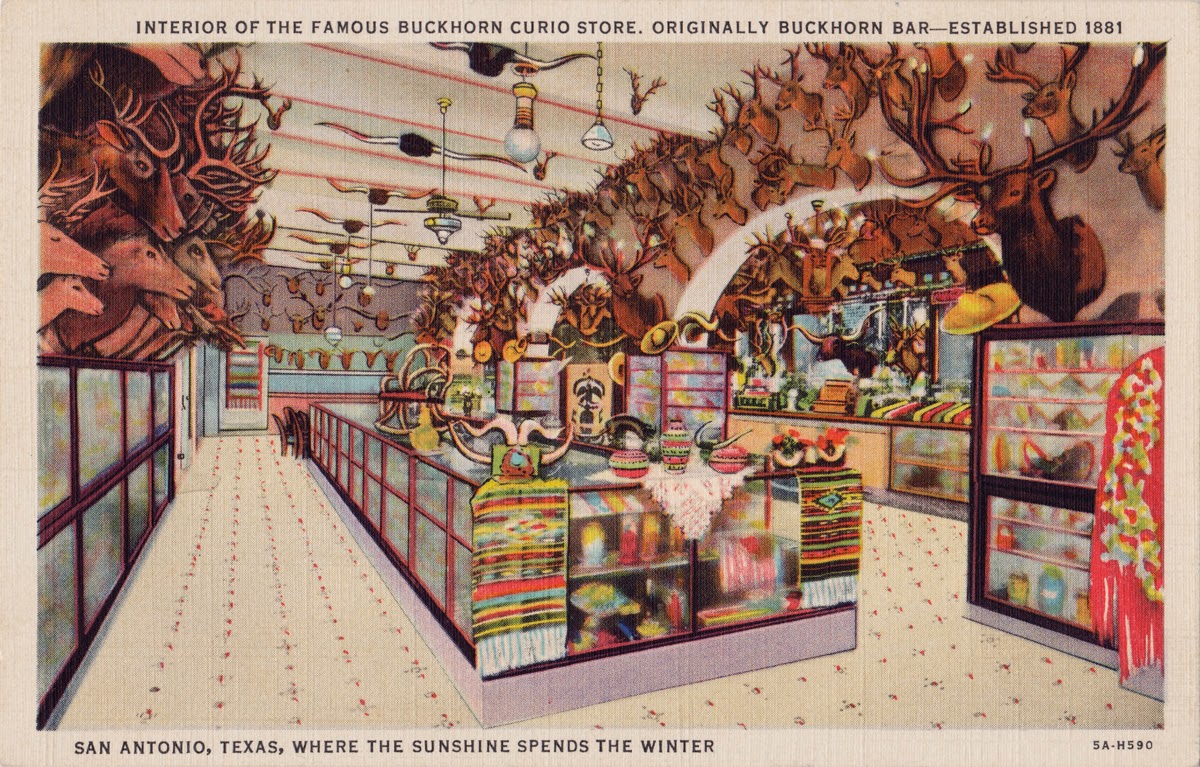 The coming of Prohibition to Texas in 1919 rung down the curtain on the fabulous Buckthorn Saloon — but not on Friedrich.  He always had had other drinking spas trying to “horn in” on his trademark, chief among them Billie Keilman’s Horn Palace, which also featured an antler motif.   When it closed in 1920, Friedrich bought Keilman’s massive collection and added it to his own.   In 1922 he relocated his business to 400 West Houston Street and opened it as a museum and curio store, catering to tourists. The result is shown above on a souvenir postcard. Initially Friedrich called it Albert’s Curio Store and eventually, after opening a restaurant on the site, the Buckhorn Curio Store and Cafe. 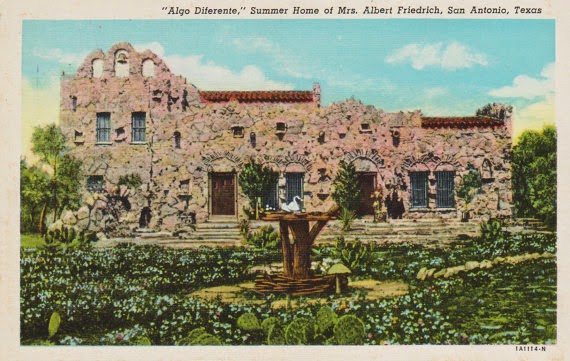 Albert died in November 1928 at the age of 64.  He was buried in Section F, Plot 3, Row, of San Antonio’s City Cemetery No. 1.  Not long after his death, Emilie Friedrich created her own particular curiosity.  On what was known as “Algo Diferente Ranch” on the outskirts of San Antonio,  she ordered the construction of a summer home.  Shown here in a postcard view, her “mansion” was built about 1930, ostensibly by a Mexican architect.  It was made of rough-hewn native stone and sat in the midst of a large wooded tract.  Today Emilie’s house stands only as a crumbling hulk, the centerpiece of what is known as San Antonio’s “Las Ruinas” Park. Albert Friedrich’s horns and Texas memorabilia have fared better.  After Repeal, the 400West Houston Street location reopened as the Buckhorn Saloon and for a time provided vaudeville entertainment.   Fast forward to 1956 when the Lone Star Brewing Company bought the collection and opened the Lone Star Buckhorn Hall of Horns, shown here.  When Lone Star sold out to Stroh’s Beer and brewing operations moved to Longview, Texas, the granddaughter of Albert Friedrich, Mary Friedrich Rogers, and her husband Wallace Rogers bought the collection.  In December 1998, the new Buckhorn Saloon and Museum was born on Houston Street, not far from the original 1881 location and just blocks from the Alamo.  The attraction can be seen above right, a number of horns projecting from the windows.

Other displays have been added over the years to the legendary collection that Albert Friedrich put together and and the Buckhorn Saloon and Museum remains a vaunted San Antonio “Texas Style” tourist destination.   Albert, looking on from those wide open spaces up yonder, must be mighty proud.

Posted by Jack Sullivan at 6:12 AM