Nathan Van Beil and His Rock’n Rye Trials of 1880

He's rock and rye crazy, down in the dock,
You'll see by his nose he loves rye and rock.
Now he has the snakes and thinks that they crawl,
He sighs for his bottle, he'd drink cork and all.
— Song circa 1880

If the gent in the song above was being going crazy by drinking rock and rye whiskey,  Nathan Van Beil may have driven near the brink of insanity by his energetic but ultimately fruitless efforts to claim total proprietary ownership of the words “rock” and “rye” in any combination.  In May 1880, he posted the stern warning below:

Van Beil’s life up to this time seemed to have been aiming toward this product and 1880. He was born in Philadelphia in 1832, one of eight children of Herman and Elizabeth Van Beil.  His father was a Jewish immigrant from the Netherlands and a successful merchant.   The 1860 Census found Nathan at the age of 25, still living with his parents.  His occupation was given as “liquor merchant.”

My belief is that this Nathan early in his working life had experience in the whiskey trade.  Philadelphia directories indicate that beginning about 1859 Henry and A.C. Van Beil were operating a wholesale liquor house at 1310 Chestnut Street in Philadelphia.  They featured the brand name, “Imperial Cabinet.”  Nathan likely was working for these Van Biels and learning the business.

By 1877 he had left Philadelphia and had opened a wine wholesale business in New York City at 88 Chambers Street, a building shown here that is still standing.  He sold his wine in glass bottles, many of them, as shown here, in amber and with a “slug plate” bearing his name.  The 1880 census found him living at 107 East 24th Street in Manhattan with his wife Valeria, an immigrant from France ten years younger than he,  and an eight-year-old daughter named Nina.  He gave his occupation as “wine merchant.”

Even then, however, Van Beil’s major interest was in a highly alcoholic patent medicine that in 1877 he trademarked as “Rye and Rock” with the Patent Office number of 7001. It was rock candy — large sugar crystals — dissolved in rye whiskey.  Nathan advertised it widely as:  “The great tonic sure cure for malarial diseases,”  — an easily made claim since at the time no one had a clue about what caused malaria.  He also touted this nostrum as a remedy for asthma, bronchitis, consumption (TB) and even diphtheria. Van Biel’s ads boasted that his Rye and Rock was recommended by “leading Physicians and adopted by the Clergy and other Professionals.”  As seen here, he used both amber quart bottles with a slug plate and clear embossed flasks. 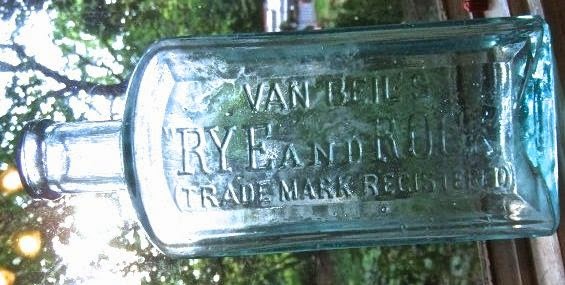 During the several years after obtaining his trademark, Nathan promoted Van Beil’s Rye and Rock vigorously. A key method was through trade cards.  One featured a comely lass with an embossed bottle of the elixir in her right hand and small dose glass in the left.  A somewhat enigmatic card featured gent who apparently was down on his luck, sitting on a barrel looking desolate.  He apparently demonstrated “Hard Times.”  The card announced a contest, asking customers to send Van Beil contrasting sketches to illustrate “Good Times.”  The prize offered was $25. 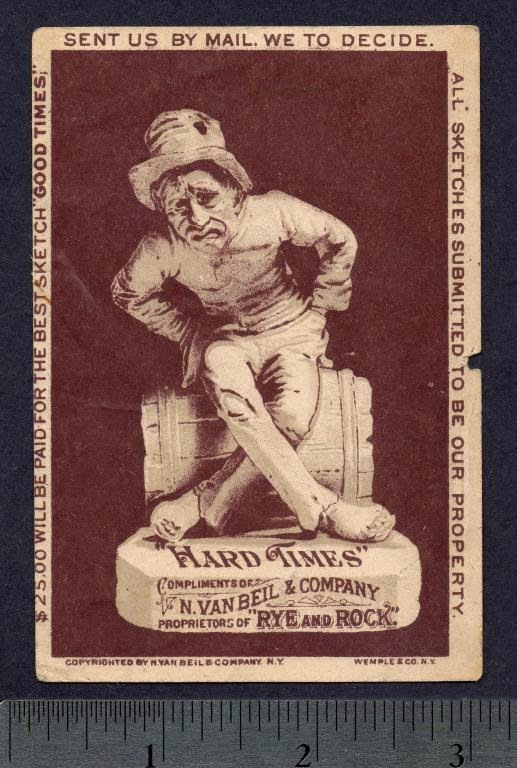 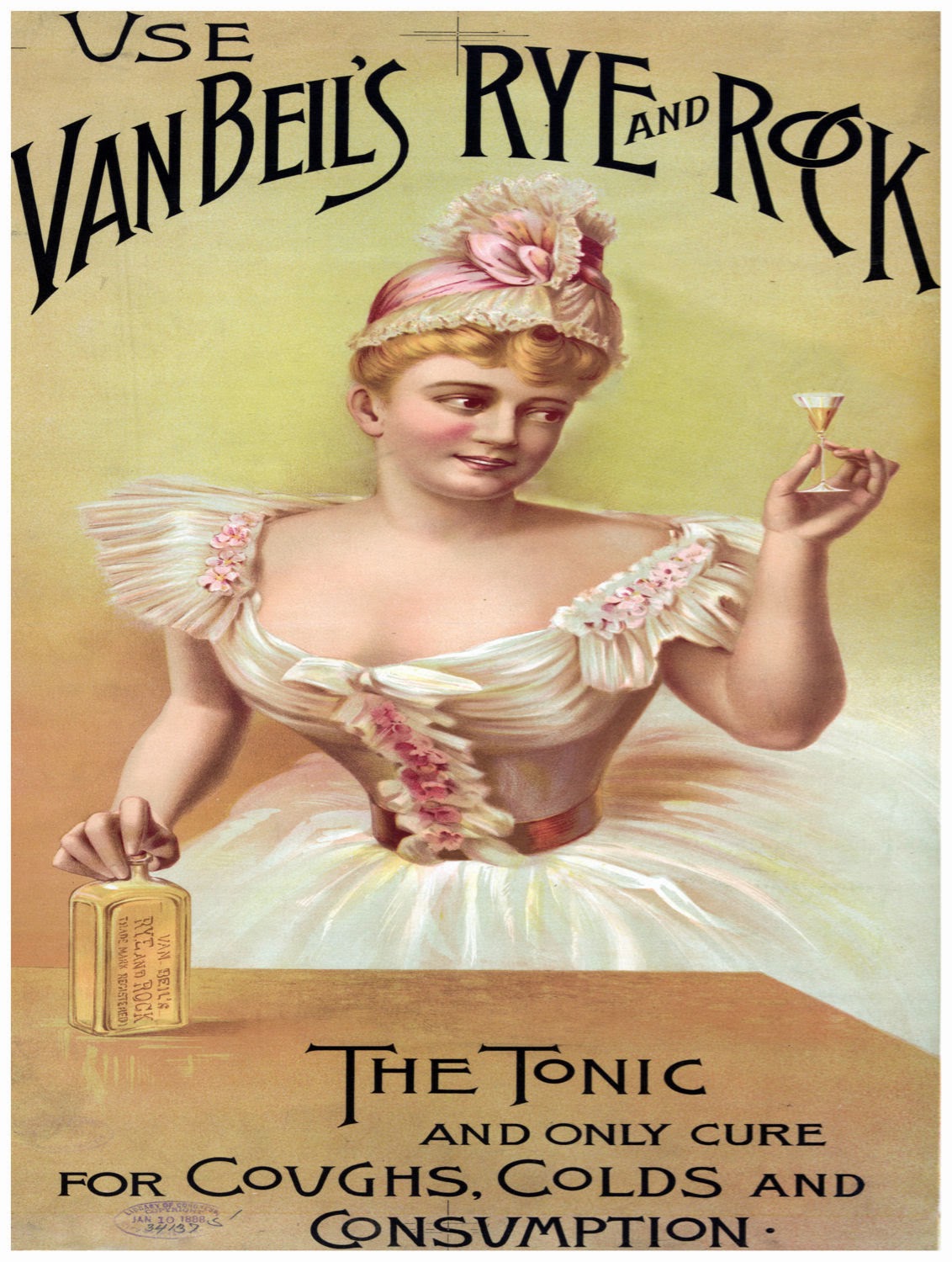 Van Biel’s advertising quickly paid off and he developed a customer base over much of the United States, despite this tonic being merchandised principally as medicine. The magazine “Epitome” in a 1880 promotional piece on the firm cited a letter from Richardson & Co., druggists of St. Louis:   “The sale of your Rye and Rock is steadily increasing here, and we look for a large trade in the article this fall and winter;  the quality of the goods being such to readily recommend itself to anyone afflicted.”  The alcoholic content of Nathan’s Rye and Rock, however, also made it a staple in saloons.

Seeing the need to expand, Van Beil moved to larger offices in New York, locating at 842-846 Broadway, and opened a new plant in Baltimore to manufacture the elixir.  Located at 39 South Liberty Street, the Maryland factory was said to be 50 by 200 feet. 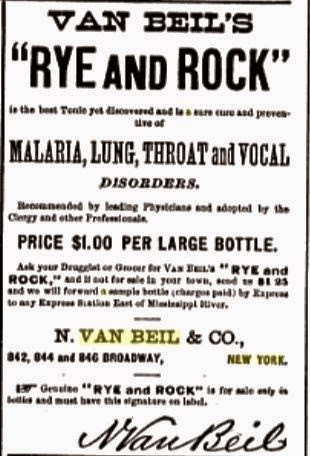 Yet even as Van Beil’s sales soared, he increasing was finding himself battling “copy cat” competitors.  His ads began to reflect his feelings of being embattled.   The product was only good if it carried his signature. This was necessary he indicated elsewhere, “as there are many counterfeits, as also imitations of this preparation.”   The culmination was the stern warning that opened this post:  “Dealers  in imitation and counterfeit gods will be prosecuted.”

Van Beil meant his threat.  By the pivotal year of 1880 he was suing in the New York courts on the grounds that his trademarking of Rye and Rock gave him exclusive right to the words, in any combination, including “rock and rye.”  His first target was an enterprise headed by Henry W. Prescott, who appears in New York directories to have been a saloonkeeper and liquor dealer.  Prescott claimed that he and his predecessors in business had been selling white rock candy dissolved in rye whiskey for at least 10 years and selling it as “Rye and Rock.”

When the lower court agreed with Prescott, Van Beil in 1880 appealed the verdict to the Superior Court of New York.  To plead his cause, he hired one of the most flamboyant attorneys in the city — and perhaps in the Nation.  Described as “a rather tall, distinguished-looking gentleman with head of bushy gray hair fast approaching whiteness,”  Andrew H. H. Dawson was a lawyer renowned for his florid prose.  As the chairman of the annual Robert Burns dinner, for example, he once wrote Poet Samuel Longfellow asking him to write a poem for the occasion, a letter that included this sentence:  “The presence of so many illustrious men, men of wealth, literary fame and political power to celebrate the natal day of the plowman [Burns] will administer a rebuke to the bold and bad men who are seeking to scatter broad cast in the virgin soil of this great republic the dragons teeth of communism.” Wonderful! 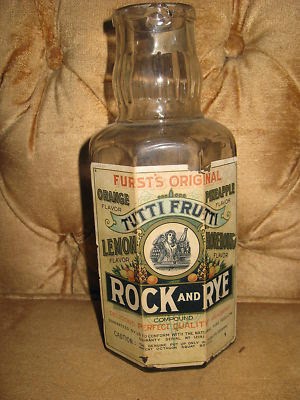 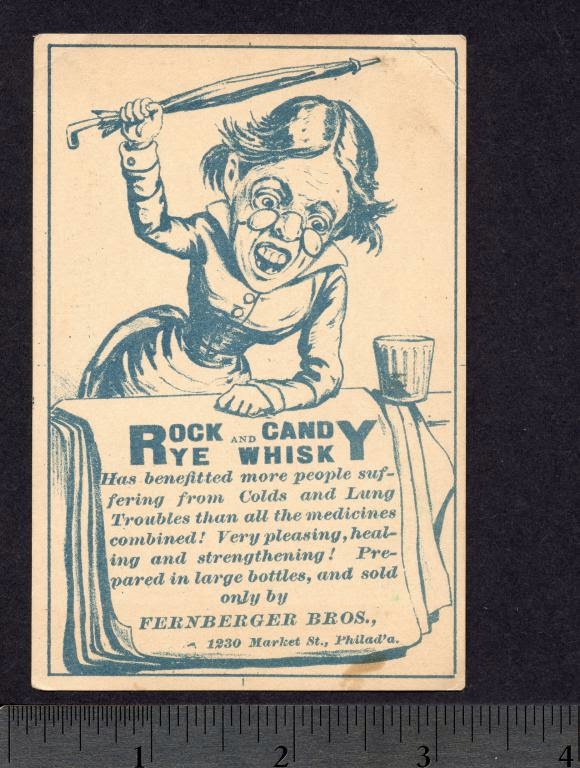 Dawson did a “tour de force” for Van Beil.  A New York legal journal of the day opined: “…There can be no doubt in this case that the judges read every word, and ought to have laughed at every one of of the fifty brilliant pages.”  The journal excerpted large chunks of Dawson’s brief in which he discoursed on the wonders of Van Beil’s nostrum.  The appeals court judges, however, failed to be impressed and sustained the lower court decision.  They held that Van Beil had no exclusive right to the name “Rye and Rock” and others could use it.  The publication in jest suggested that Henry Prescott might have been “dispensing his compound not at the bar alone, but also at the bench”  to influence the verdict.

Van Beil obviously had to have been very disappointed with the decision. Other brands of rye whiskey and rock candy, as those shown above, proliferated.  As a result, Van Beil changed his advertising approach, captured below on a trade card:  A shipwrecked man has ditched his bottle of cod liver oil and is reaching for a  bottle of Van Beil’s Rye and Rock.  The label on the bottle acknowledges that it contains “Baker’s Pure Whiskey” in combination with white rock candy.   Baker’s was a quality Kentucky whiskey and the name would have registered with customers nationwide.  Nathan now was wooing drinkers, not just druggists. 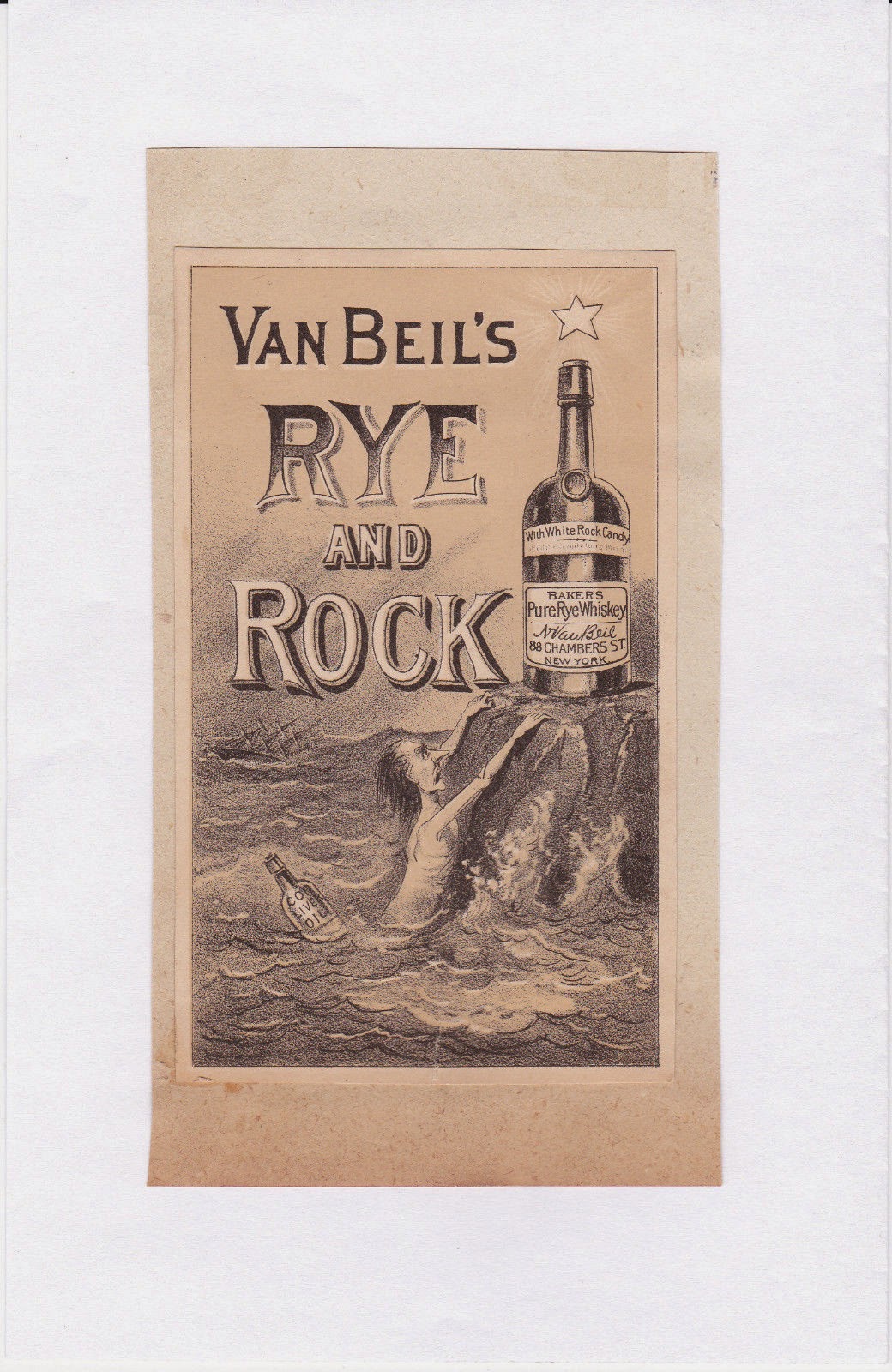 I have not been able to determine when Van Beil quit the wine and liquor trade.  Sometime after 1900, he terminated his business, moved out of New York City, and headed westward to Los Angeles. He died there in 1915 at the age of 80, was cremated at Forest Lawn Cemetery and at his request, his ashes scattered.  That was 35 years after the pivotal time in 1800 when his dream of “rock’n” into riches with a rye whiskey remedy — without any competition — came to an abrupt end.

Today “Rock and Rye” is available behind the bar in most drinking establishments, with multiple brand names and manufacturers.  Over the years other flavors, like lemon and tutti-frutti, have been added.  In many ways the variety available today was made possible in 1880 when a New York Superior Court told Nathan Van Biel that his trademark claim of an exclusive right to "rye and rock" could not be enforced.

Posted by Jack Sullivan at 6:38 AM