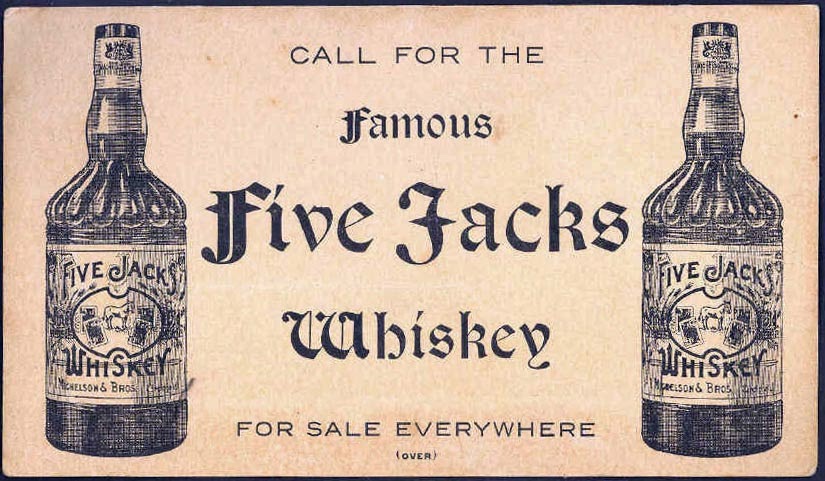 The Michelson brothers, all immigrants from Germany,  settled in two cities, Cincinnati, Ohio, and Austin, Texas, and made selling whiskey a prime objective.  Their national brand was Five Jacks — illustrated by four playing cards and a donkey — that proved to be a winning hand in the wholesale liquor game and allowed them to rake in the chips for thirty-two years.

The eldest brother was Morris, born in 1839.  Five years later came the birth of Abraham  and 10 years after that Isador.  Isador, however, was the first to immigrate to the United States in 1872, choosing to live in Cincinnati.   Morris followed him in 1880.  At an undetermined later date Abraham came to America after living for a time in the Middle East in what then was known as Palestine and is now Israel. This third Michelson brother settled in Austin where, according to reports, he initially was engaged in the produce trade.

In 1886,  Isador founded a liquor wholesale business that initially was known as “I. Michelson & Bro.”, located at 129-131 Sycamore Street in Cincinnati.   The brother, I surmise, was Morris.  As an early company letterhead above indicates, they termed themselves “distillers” and advertised Hoffman House and Bouquet Whiskeys.  Not really distillers, the Michelsons were at most “rectifiers,”  that is, mixing and compound whiskey from supplies obtained from nearby Kentucky distilleries.

Their brands were:  "Bonanza King,” "Lord Bacon,” "Old Curtis,”  "Old Morris 1878 Brand,” ”Red Polled,” “Roseberry,” "The Hoffman House Bouquet,”, "Uncle Tom Gin” “Elkhead Buchu & Gin,” and “Five Jacks Whiskey.”    Five Jacks was far and away the Michelson’s flagship brand.  The Michelsons sold it wholesale in barrels and retailed it in glass bottles and in ceramic jugs with an elaborate underglaze label of playing cards and a donkey, shown here.

Eventually the name of the firm was changed to include the third brother,  as “I. Michelson and Bros.”  Abraham initially may have been working as an agent for his brothers in Texas, doing business from the Board of Trade Building.  About 1894, Abraham exited the firm, apparently with family approval, and opened his own wholesale liquor dealership at 325 and 327 Congress Avenue in Austin.  He featured many of the same brands as the Cincinnati Michelsons.  As a wholesaler, he probably marketed to the many swinging door establishment in that Texas town, including John Neff’s “Iron Front Saloon” [the subject of a September 2014 post].

Meanwhile all three brothers were having personal lives.  According to 1900 Census records.  Isador had married in 1880.  His wife Bertha also was German-born. The family would have six children, of whom five lived to adulthood.  After living the bachelor life for many years, Morris married in 1888 at the age of 49.  His wife, Sarah, was 24 years his junior.  The couple was recorded as having five children, all sons.    Meanwhile in Texas Abraham married a woman named Henrietta.  Their family would include three children. 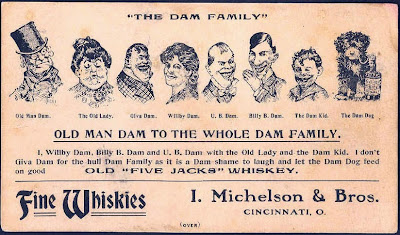 The Michelson brothers were gaining a national market for their whiskey blends, particularly Five Jacks, often using humor to sell it.  Their advertising was vigorous and as shown here in a trade card sometimes, on the outer edge of good taste — but humorous.  The card depicted the “Dam” family, including such luminaries as “Old Man Dam,”  “Giva Dam,”  “Wilby Dam,” “U. B. Dam,” “Billy B. Dam,” “The Dam Kid,” all the way down to “The Dam Dog.”  Plus “The Old Lady,” apparently Mrs. Dam.  The dog is shown sucking out of a bottle with the notation that “…it is a Dam shame to laugh and let the Dam Dog feed on good old “Five Jacks” whiskey.”  Unlike many trade cards that were generic in nature, this one had to be designed by the Michelsons, using a very creative cartoonist. 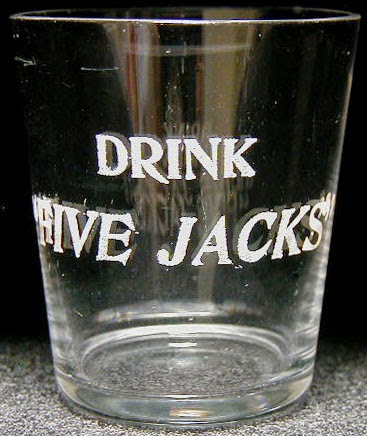 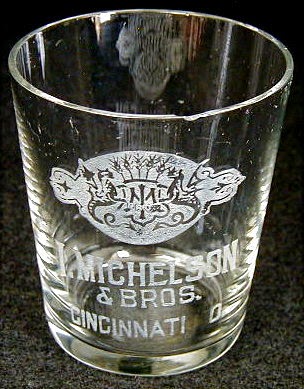 The brothers also were giving away advertising items to favored customers, including shot glasses and well-decorated back-of-the-bar bottles,  As shown here, most of those artifacts advertised their Five Jacks brand.   As Isador’s sons grew to maturity he took them into the liquor business.  The 1910 census indicated that Sigmund Michelson was employed as a salesman and Edwin was bookkeeper and cashier.

Meanwhile, Abraham was prospering in Austin.  He had been able to move into a new building, shown below, that was two-stories, 46 by 100 feet in dimension, containing his stock of liquors and foreign and domestic wines.  He appears to have been receiving whiskeys from his brothers, as well as from sources in Kentucky and Pennsylvania.  He was also selling cigars that bore the “Hoffman House” imprint.   A. Michelson Co. employed two traveling salesmen.   A contemporary publication called the firm: “…A concern whose reputation is beyond question and is eminently reliable.”  Of Abraham himself,  it said:  “Mr. A. Michelson is a well known and popular resident of this city and a businessman of the highest standing.” 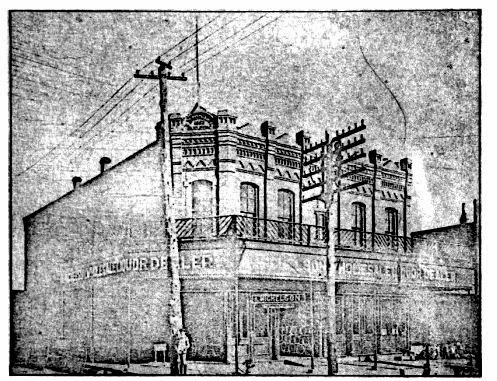 Abraham died in December 1903 at the age of 58, the cause of death recorded as diabetes.  His funeral was held at his residence at 910 West Sixth Street in Austin, attended, according to a press account, by a large number of friends and relatives.  The latter included his wife, Henrietta, and their grown children.  Burial was in the Oakwood Cemetery in Austin.  In 1915 Henrietta would join him in Section 1, B11, Lot 10.  Abraham’s grave marker is shown here. 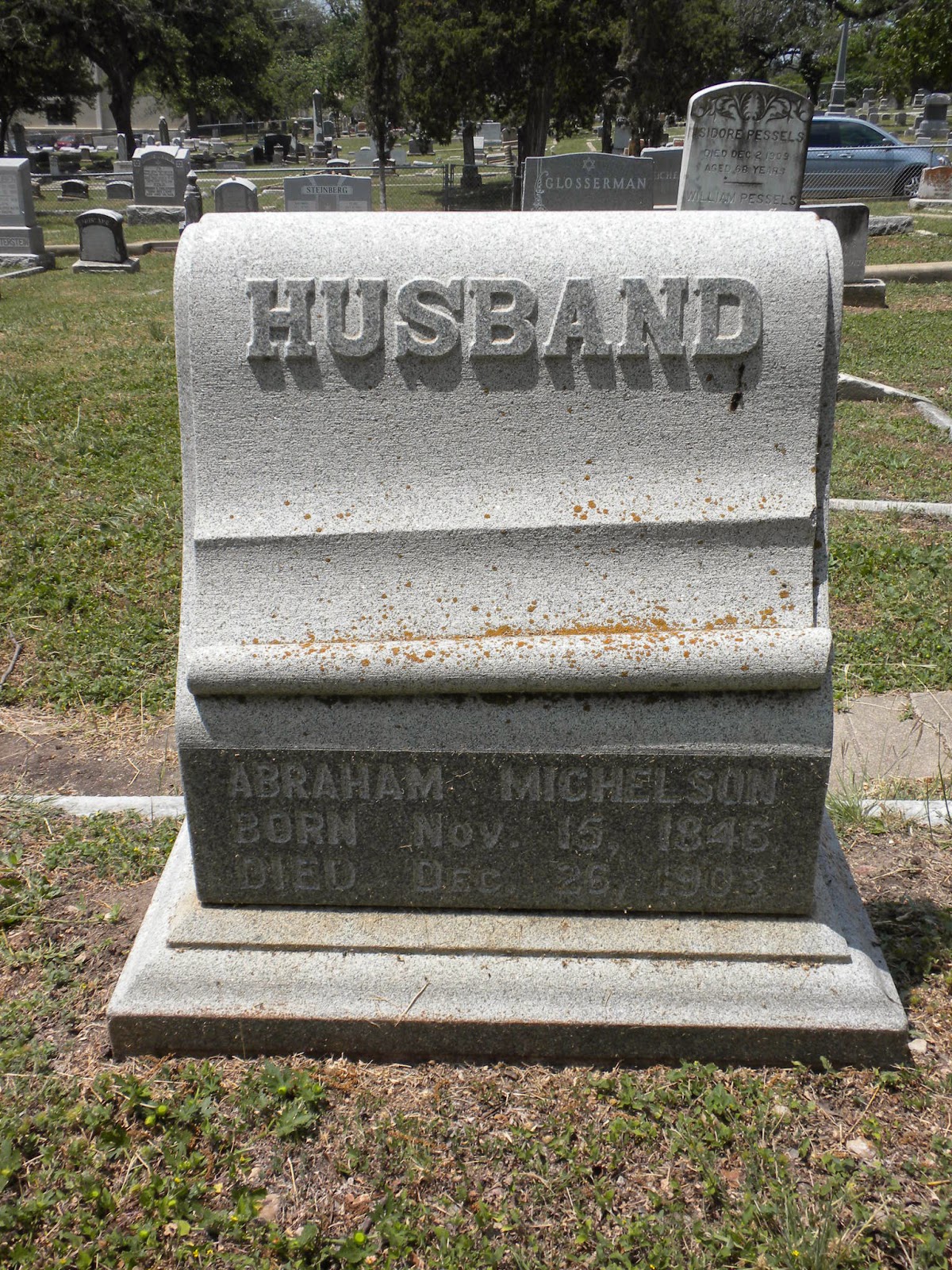 Of the fates of the other Michelsons, my research has revealed little.  As late as 1914 Morris was identified with the firm in Cincinnati Chamber of Commerce records.  I. Michelson & Bros. continued to be listed in local business directories until 1918, despite Ohio voting “dry” in 1916.  This may indicate that the company was send whiskey supplies out of state to areas where sales of alcohol were still allowed.  The location of Morris’ and Isador’s graves as yet have not been recorded on relevant websites.

While laying down five jacks in a Texas card game might well get a player shot during an earlier day, the Michelson had turned four face cards and a jackass into a national brand and prosperity by dint of their creativity and a distinctly humorous approach to marketing.  In a very real sense they paved the way for the jocular labels that so frequently appear on wine and beer in our own time, assuredly to make the bottles stand out on dealer shelves.

Posted by Jack Sullivan at 6:11 AM