On land that their family had owned and occupied almost since the American Revolution,  James and J. Alec Bumgardner put their name in the forefront of American distillers and established Virginia-made whiskey nationally as a quality liquor.

James Bumgardner. born in 1801, was the son of Jacob Bumgardner, who had inherited the land and started a small distillery.   When Jacob died even though James was the second youngest, he inherited his father’s entire interest in land, slaves and other property.  A descendant believes that was either because he had the best head for business or because his brothers were otherwise occupied.

By that time Bumgardner was already married, recorded as having wed a woman named Mary in Virginia in 1853.  By their birthrates on their tombstone, that would have made James 18 at their wedding and Mary only 11, possibly an error.   As his children came along — there would be 14 in all — Bumgardner saw the need to build a new and more substantial home for his family on his property .  To that purpose in 1857 he engaged Jonathan Brown, a Richmond carpenter and contractor who moved to Augusta County to oversee the construction. 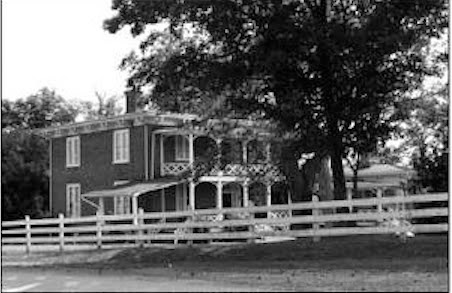 Brown fashion a home known as Bethel Green, shown above, that still stands in and is on the National Historical Register.   Although the house was built according to the eclectic fashion of the times with Gothic style porches, fancy chimney stacks, scrolled lattice work, and Italianate bracketed cornices, the interior was Victorian from its wallpaper and carpeting to its furnishings, all of them preserved.  An historian has speculated that:  “Bumgardner apparently was determined to decorate and furnish his house in the latest fashion and the excellently preserved interior survives as an important example upper-middle-class taste of the period.” 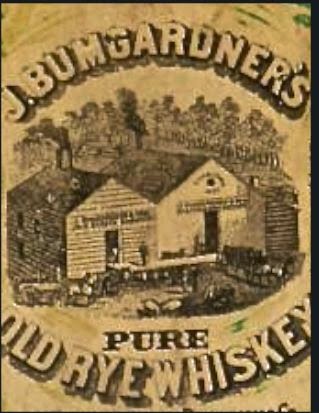 However much Bumgardner might have enjoyed his new home, however, he had only a few years to enjoy it until the Civil War broke out.  When the war ended, the farm and distillery were in ruins, many of his slaves had departed and the entire countryside around lay in ruins.  Undeterred, he determined to rebuild his fortunes by rebuilding the distillery and making "Bumgardner Pure Old Rye Whiskey" a well-known, well-respected national brand.
His unembossed bottles bore labels that depicted an artist's view of his operation.  His company also trademarked the brand name and a logo, shown above.  James' motto for his whiskey was:  Wherever it goes, it goes to stay."  Before long the Bumgardner's whiskey was being sold from coast to coast 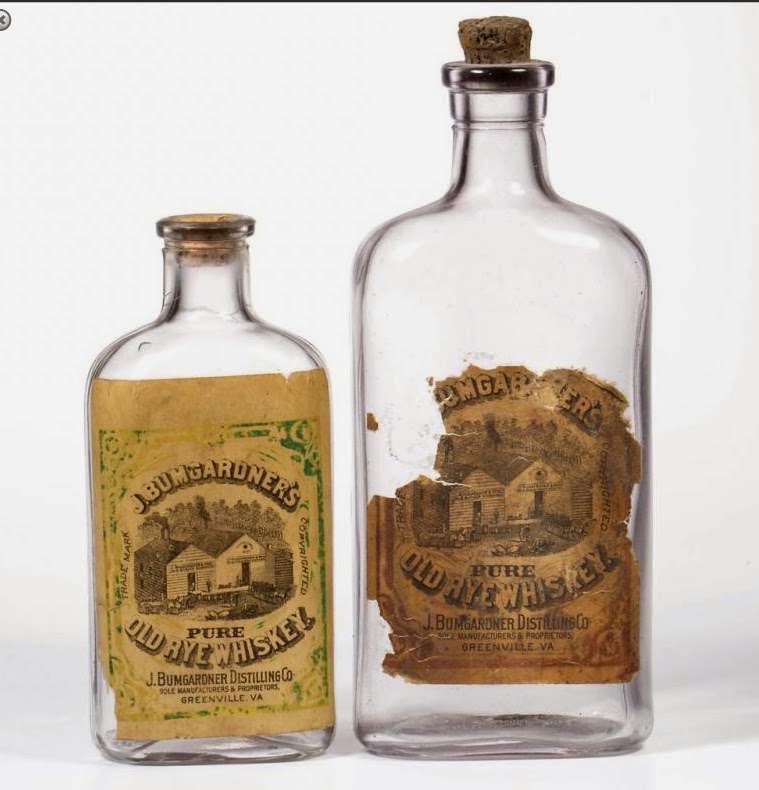 Like other distillers of his time, he was quick to elicit testimonials to the quality of his product.  From Prof. J. L. Campbell of Washington & Lee University at nearby Lexington, Virginia, he got the following testimonial:  “The sample of Whiskey sent here by you for analysis has been subjected to careful Chemical examination and found to be free from all drugs or substances foreign to Pure Rye Whiskey.  Its mildness and purity adapt it very well to Medicinal purposes for which PURE WHISKEY is wanted.”    Prof. R.S. McCulloch was singularly complimentary and added:  “Our people little know or imagine what villainous fabrications are sold to them, sometimes even poisonous by dealers in cheap Wines and Liquors.”

Captain James also was quick to protect his brand, even from a family member.  His son, Randolph, recounted this anecdote:   James, was a man of big heart, but positive in language and convictions. “[His brother, Lewis] after coming back to Augusta, decided to start a distillery and adopted as his brand, "Old L. Bumgardner Whiskey". [Capt. James] was far from pleased at the opposition business, and much more displeased at the similarity of trade names, with the consequent likelihood of confusion in the mind of the trade:  The following interview is said to have transpired:  "Lewis, I understand you are going to start a distillery?"
"Yes, James".
"They tell me you are going to call it 'Old L. Bumgardner Whiskey."
"Yes, James."
"Well, Lewis, all I have to say to you is, that you want to make that 'L' most damned plain.'' 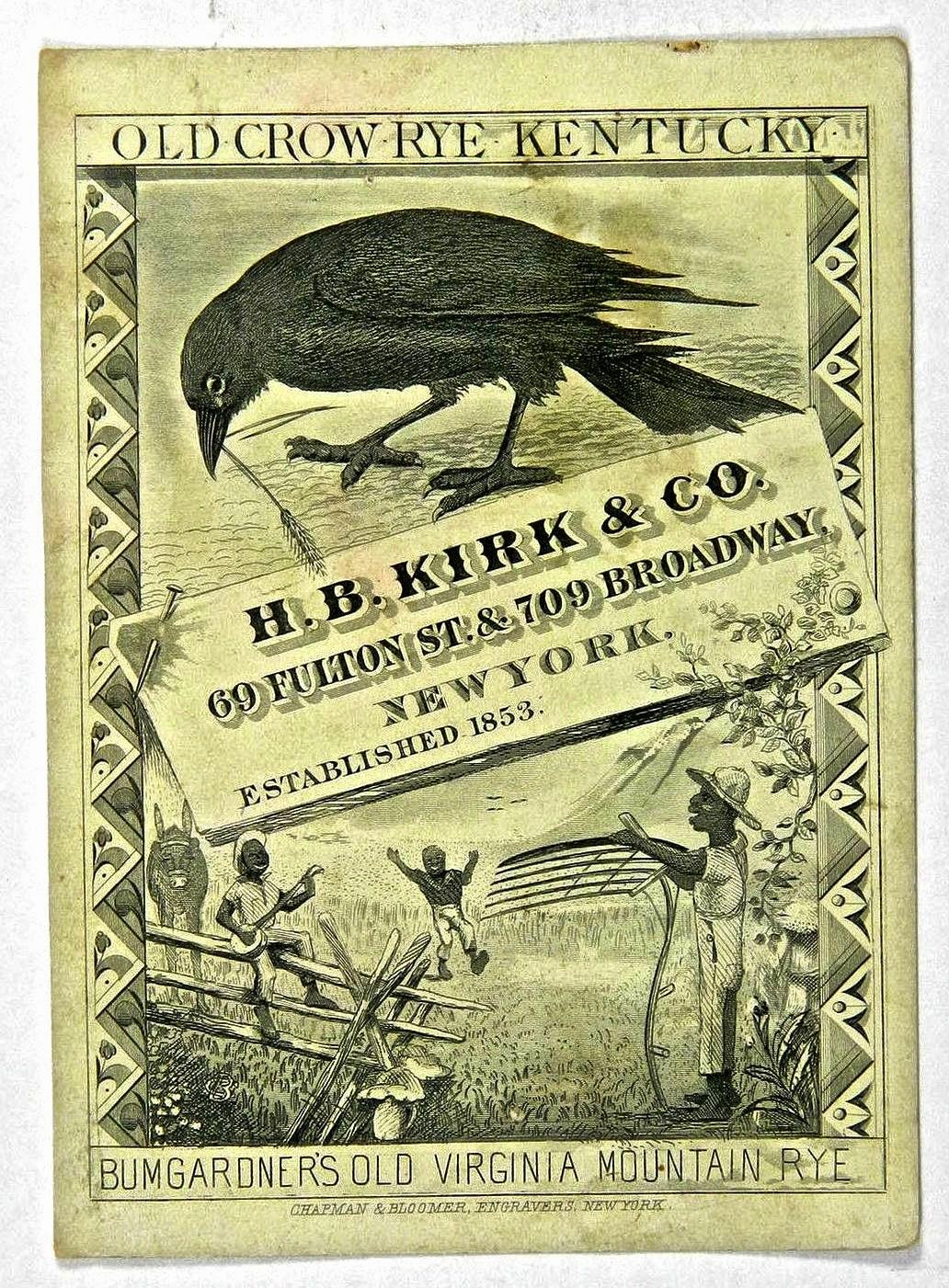 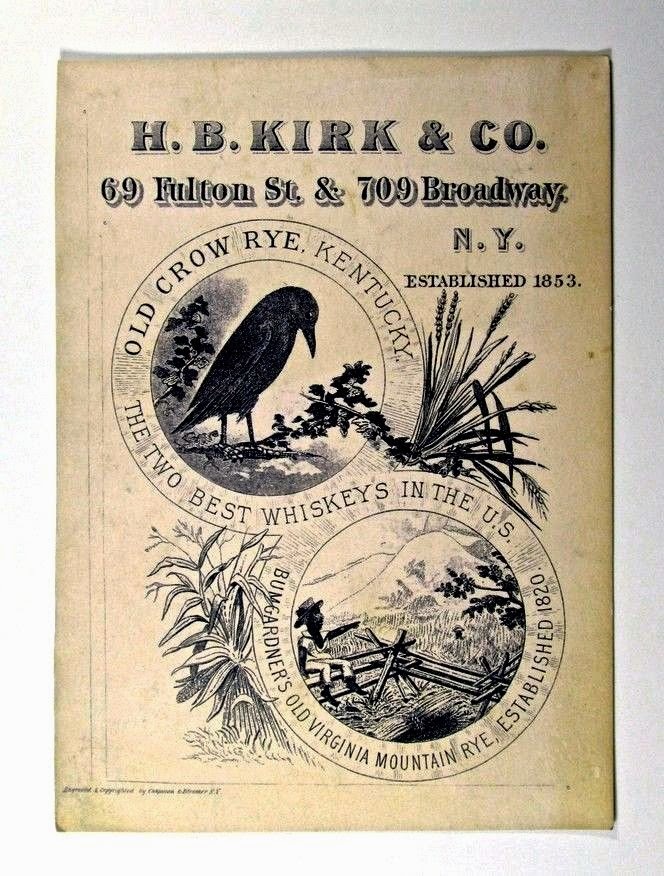 By dint of Bumgardner’s energetic merchandising, he was able to engage the H. B. Kirk Company of New York, an organization that marketed “Old Crow” Kentucky-made whiskey for a group of New York investors.   Kirk also began featuring the Bumgardner rye in its advertising calling the brands:  “The Two Best Whiskeys in the U.S.”   Given the national advertising of this group,  this Virginia whiskey was put firmly on the map of America.  Note that the two Kirk trade card have distinct “Old South” themes.  At right, the familiar “darkies are singing in the fields” is reprised.  At left an African-American lad is sitting on a rail fence, pointing at a mountain.  In reality, some of James’ freed slaves stayed around Bethel Green after the Civil War.

Other family stories tell more about James: “The old gentleman would never argue a proposition. He was firm in his convictions, and, if he thought, he was right, would invariably back his judgment with his money. If anyone challenged his opinion, his answer was, "I'll bet you ten dollars", and it was put up or shut up.”   As he aged, he turned his distillery and farming interests over to two sons, J. Alec and William, and enjoyed the comforts of his home.  As a descendent told it:  In his lifetime Bethel was a cheerful place with its large gathering around the blazing hickory-wood fire in the living room. Grandfather occupied the big horsehair chair in the center, his tall, gold-headed staff in his hand or in easy reach, and his favorite dog old "Tige" slumbering peacefully at his side.”
While both of James' sons are identified in various ways with the Bumgardner whiskey reputation, William and J. Alec (Jacob Alexander) are alleged to have been less gifted businessmen than their father.  A family narrative blames them for another financial setback for the Bumgardner fortunes because of bad investments they made during an 1890s economic turndown. Another descendant notes that financial problems and the deaths of both James, whose gravestone is shown here, 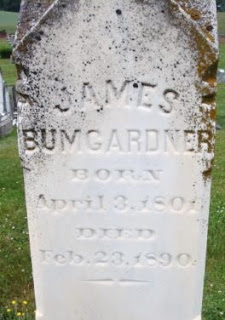 and William in 1890 had a negative effect mentally on J. Alec, who had the principal responsibility for the farm and its enterprises.  A sister, Bettie Waddell Murphy, bought the property but allowed J. Alec to live there until his death in 1930.

How long whiskey continued to be made at Bethel Green is unclear. Certainly distilling would have had to cease when statewide prohibition was voted in Virginia in 1916.   After a history stretching almost back to the American Revolution the family’s distilling enterprise came to a halt.  In the meantime whiskey drinkers all over the U.S. had taken notice of Virginia for quality distilling.

Note:  It should be noted that an earlier version of this post had some important errors in it that an alert descendant who has identified herself below only as "Alice" has pointed out and provided new information. Some of the personal items related here about James came from a letter document written in 1923 his son, Randolph, relating anecdotes about his father for the edification of his daughter.  The information is on the Internet and describes the life of the family patriarch in an affectionate, if episodic, fashion.

Posted by Jack Sullivan at 9:59 AM