Abraham and the Overholts: “Comin’ Thro the Rye” 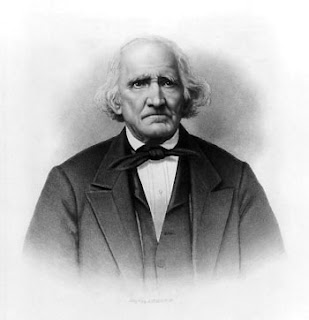 The stern-faced elderly gentleman shown here is one of most famous faces and names in the liquor trade.   His name is Abraham “Abram” Overholt and his picture is on bottles of whiskey in American packages stores from coast to coast .  Beginning in 1810 Abraham and his Overholt clan came through rye whiskey to achieve fame and fortune.

The Overholts were Mennonites, a religious sect that was often persecuted in Europe for their beliefs,  one of which was that creating alcoholic spirits for imbibing was an honorable profession.   As a result,  when Abraham’s father, Henry, brought his wife and twelve children from Bucks County to the Jacobs Creek area of Westmoreland County, Pennsylvania,  he had an interest in distilling.  Settling with other Mennonites in an 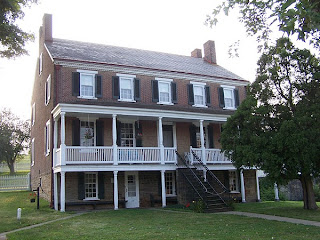 area known as West Overton Village,  he bought a farm and inherited a small distillery made of logs.  Production was limited to a few gallons a week.

Born in 1784,  Abraham was 16 when the family moved.  As he was maturing he showed considerable talent as a weaver but his major interest was in making whiskey.  In 1810, at the age of 26, he took over the still.  He began producing about eight gallons a day but soon had increased the output to 200 gallons -- in effect, creating a commercial distillery.   He also added a grist mill.  About the same time he married 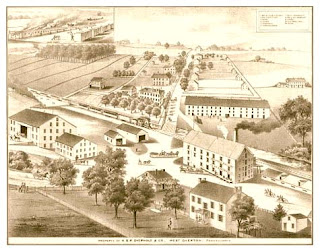 Maria Stauffer,  daughter of a prominent Mennonite.   They would have eight children.  Before long Abraham built his family a fine Georgian home,  shown here, at the site of his West Overton operations.   He called his product “Old Farm Pure Rye Whiskey.”  Eventually He brought his son Henry Stauffer Overholt into distillery management and titled his business the A. & H. S. Overholt Company.

As the distillery continued its expansion, a village of workers’ houses were created.  These tenants worked for Abraham as coopers, millers, laborers and later,
even coal diggers when a

deposit of coal was found on the land. Two other Overholt houses were built on the grounds, one for Henry  about 1846 and second for another son, Christian, constructed about 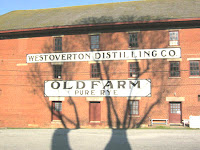 1854.  The latter doubled as the company store.  An illustration from the 1870s shows the West Overton complex.  The distillery is shown with smoke billowing from its stack.  This building had been constructed in 1860 and the original distillery and grist mill torn down.  A cooperage was added.

That same year another of Abraham’s sons, Jacob, together with a cousin, Henry Overholt, built a second distillery in nearby Broad Ford, with the blessing and financing from Abraham.  It was at that 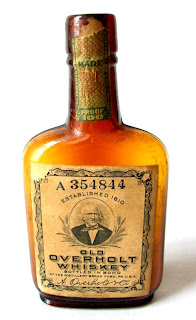 facility the first rye whiskey bearing the Overholt name was distilled, bottled, and sold.  Note that at first it was branded simply  “Overholt” and that only later was “Old” added.

Abraham is said to have been directly involved in the management of the family’s distilling operations until his death in 1870 at the age of 86.  His son, Henry, unfortunately died the same year.  Jacob Overholt and other family members took the reins.  As a sign of respect to Abraham they added his picture to the label of the their rye whiskey.  They sold it in bottles of several sizes and shapes and advertised widely.  One of their slogans was: “You are not safe without Old Overholt in the house.” The Overholts also issued giveaways to favored customers, including paperweights and saloon signs.  About 1878 they opened a sales office in Pittsburgh.

In 1906 the Overholts constructed a six and one-half story bonded warehouse of brick. Shown here,  it has been restored as a museum. 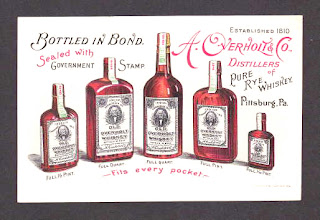 Under the supervision of Abraham C. Overholt,  son of Henry S., they also built a boiler house, an office building and a dry house  The company was reorganized in 1907 into two entities. The now renamed West Overton Distillery managed whiskey production and the A.C. Overholt Company maintained control over the physical structures and other family  enterprises.

In 1846, Abraham Overholt hired John W. Frick, a Swiss immigrant, to work in the grist mill located in the village.  While working, he met Abraham’s daughter, Elizabeth, and they were 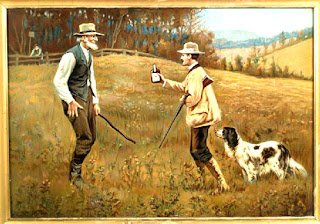 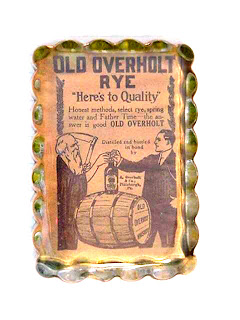 married in 1847.  On December 19, 1849 their son, Henry Clay Frick,  destined to be one of America’s most notorious and wealthiest “robber baron” industrialists, was born in the spring house located adjacent to the homestead in which Abraham and Maria Overholt lived.

Frick spent the first thirty years of his life at West Overton.  It was here that Grandfather, Abraham is said to have taught the future multimillionaire the importance of a strong work ethic and the inner workings of business which included shrewd bargaining and the importance of taking risks.  As a young man,  Frick went to work as a bookkeeper for the Broad Ford distillery, eight miles away. He also is said to have established the coke industry at West Overton.

Frick was the last in the line of Overholt clan to own the distilling business.  When he died in 1919 as National Prohibition was about to be enacted, his stake in the enterprise went to his friend Andrew Mellon.  When Mellon was appointed Secretary of the Treasury in the Prohibition-era administration of Warren Harding he turned over a stockpile of about two million gallons worth of Overholt Rye whiskey to an organization called the Union Trust Company.   During Prohibition, Overholt Rye was sold as “medicinal” whiskey – legally by prescription, but also furtively in speakeasies.  By 1925,  the two million gallons had been sold, some overseas.  The press used the 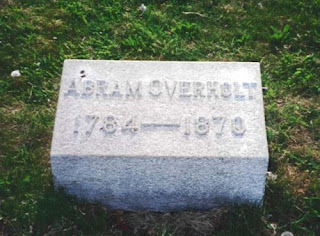 The Overholt brand, meanwhile, was purchased by the National Distillers Products Co., who owned it until 1987, when National Distillers was bought by Jim Beam Brands.  Since then, Overholt Rye has been an active Beam Brand, sold under the name Old Overholt Straight Rye Whiskey.   Abraham’s picture remains on every bottle.

In 1922, Helen Clay Frick, Henry's only surviving daughter, began to purchase the buildings in West Overton where her great grandparents,  Abraham and Maria, had lived and her father was born. In 1928, Helen Frick founded the Westmoreland-Fayette Historical Society to operate and maintain the site, known as West Overton Museums.  Today, West Overton Village consists of the remaining eighteen Overholt buildings. It is listed on the National Register of Historic Places.   The site celebrates the man who began it all and through rye whiskey has come to be a familiar face to many Americans--Abraham Overholt.