Buffalo’s Gustav Was the Other Fleischmann Brother 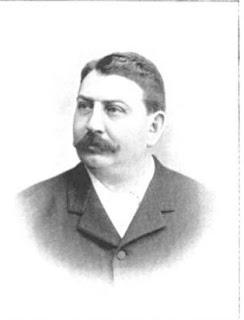 Just about the time the last guns of the Civil War had been silenced, brothers Charles and Max Fleischmann emigrated to the United States, settling in Cincinnati.  There they founded a business empire based on yeast and distilling spirits that made them and their families rich and famous.  Less recognized was their younger brother, Gustav, shown here, who arrived later on these shores and successfully pursued the whiskey trade in Buffalo, New York.

Born about 1849, Gustav watched his brothers leave home, yearned to come to America, and at the age of sixteen bade his mother, Amelia, and father, Abraham, goodbye and headed over the Atlantic to seek his fortune.  He settled first in New York City, working as a stonecutter for the noted sculpture firm of Casoni & Isola.  He also attended night school and the Cooper Institute to pursue studies in

mathematics and design to improve his skills for his occupation.  Gustav might have spent his life cutting stone but health problems caused him to abandon that work and go to live with his brothers in Cincinnati.

They welcomed him into their business ventures and helped him learn the techniques of distilling.  After several years working with Charles and 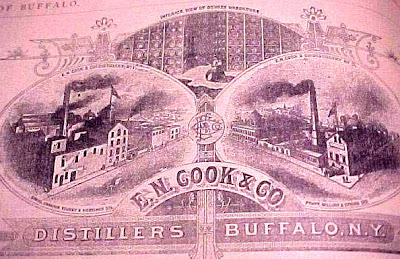 Max,  Gustav was anxious to step out on his own.  Buffalo seemed a likely place to engage in the whiskey trade.  At the time the Federal Government had levied a 90 cents per gallon tax on liquor and forced companies to manufacture at least 80% of capacity, whether for profit or loss.  As a result a number of New York distilleries had closed their doors.  Only several remained.  One was located in Buffalo, a prime site because it was a grain terminus.

That distillery had been built just 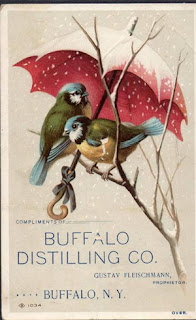 before the Civil War at the corner of Pratt and William Streets.  It was shut by the Feds in 1872 and bought by a Buffalo local named Moore. He operated it for a decade before he suffered the same fate, taken over by the government for failing to operate at 80% of capacity.  When the property came up for sale again, Gustav Fleischmann saw an opportunity.  With financial backing from his brothers he created a partnership with an experienced Buffalo whiskey man named Edward Cook.  Together they bought the distillery.  Although Gustav’s name appeared on the company letterhead, business was done as E. N. Cook & Company.

In rapid fashion the partners turned Moore’s distillery to making rum and opened another distillery for grain alcohol products.  The latter boasted a four story warehouse building said to be capable of holding up to 15,000 barrels. An 1884 ad pictured the two distilleries, the grain operation on the left. The latter was said to be capable of producing up to seventy barrels of whiskey a day from twelve copper distilling tubs, each with a capacity of 5,500 gallons. 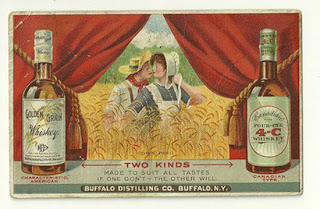 The efforts of the partners met with quick success.  In effect they were the lone distillery operation in all of Western New York State. Other whiskey men in the region were merely wholesalers and rectifiers.  E. N. Cook & 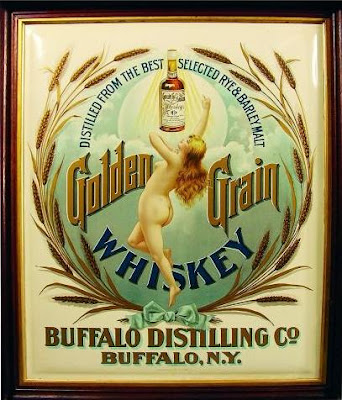 Company expanded into markets in Pennsylvania and Massachusetts.  For many years the firm paid Uncle Sam $30,000 a month in taxes, indicating tremendous production.

In 1893 Fleischmann bought out Cook’s interest in the firm.  He quickly reorganized the company and changed its name to the Buffalo Distilling Company. The company used a plethora of the brand names, including "Continuous,” "Diamond Old Tom Gin,”  "Maple Gin,” "Old Colonial Rye Malt,” "Old Mahogany,” "Silver Barrel,” "Silver Medal,” and "Superior Old Tom Gin."  The flagship labels were “Golden Grain Whiskey” and “Four-Cee (also written 4-C) Canadian.”  Neither brand seems to have been trademarked.

Gustav advertised both whiskeys extensively, including providing saloons with signs.

Among them was one with a particularly bottom-heavy nude who clearly is enraptured by Golden Grain.  His giveaways to favored customers including celluloid wrapped match safes and a celluloid pocket charm shown here. Its reverse side indicates that Gustav may have had a sense of humor.  It reads:  “This charm if carried in the pocket of a person who drinks Golden Grain Whiskey prevent Bald Heads, Hard Work, Love, Warts on the Nose, Bicycle Fact, Dark Brown Taste, War Craze, Swelled Head,  Delirium Tremens, 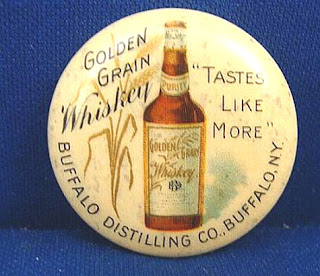 Unhappy Marriages, Insanity and Punctured Tires.  Avoid Substitutes.”  He also issued a metal pocket charm for Four -Cee.  Ironically, it has a swastika symbol on the obverse.

Gustav, like his brothers, was active in multiple forms of commerce.  He was president of the Meadville (Pennsylvania) Distilling Company,  the Frontier Elevator Company of Buffalo and, for a time, the Merz Universal Extractor & Construction Company, all facets of the larger Fleischmann family business empire.  He was a noted hunting enthusiast and a member of the Adirondack League Club from whose hunts he was reputed to bag several deer every year.  He also was a member of the Elks Club. 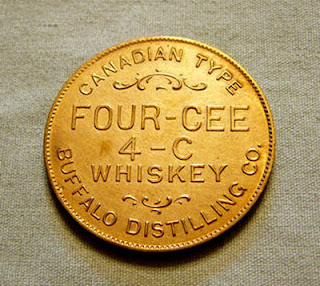 According to contemporary reports, Gustav owned a fine residence in Buffalo.  He also purchased a sumptuous vacation home in Ontario Canada, not far from Niagara Falls.  He named it  “Clarette,”  in tribute to two of his daughters, Clara and Thometta.  Shown here, the house stood on a four-acre block with gardens and stables at the rear.  Also on the site were a guesthouse and staff cottages. Fleischmann sold it in 1912.

Like many other firms in the whiskey trade,  Buffalo Distilling Co. was put out of business by the advent of Prohibition.  Thus ended the whiskey career of a man of whom it was said in 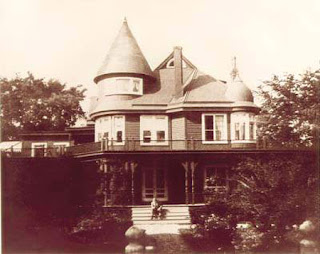 1898 by a publication called “Men of New York”:  “Gustav Fleischmann is one of the many sons of the Old World who have attained prosperity in this new land and have contributed their full share to the growth and development of their adopted country.”