Jacob Bergerman Sold Whiskey in the Heart of Mormon Land 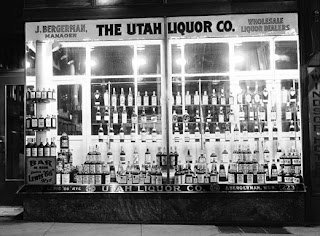 To quote one observer:  “It is a sight you would never encounter today: liquor bottles proudly displayed to the public in a big shop window, only a couple of blocks from Temple Square, right out there on a bustling thoroughfare for the whole world -- Mormon and gentile alike -- to admire.”  He was talking about the picture shown above of the Salt Lake City store where Jacob (“Jake”)  Bergerman sold whiskey at the home base of the tee-totaling Mormons.  He called his firm the Utah Liquor Company. 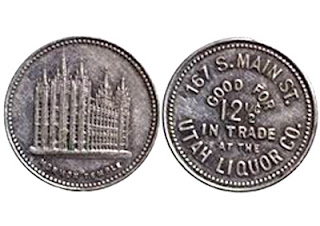 was the son of Marcus Bergerman who uprooted this family in the spring of 1868, when Jake was only 13, and moved to Colorado, settling in Pueblo.   Jacob finished his education and at age 19 in 1874 began an apprenticeship in the printer’s trade, which he practiced for three years. Apparently growing restless,  he left that job to roam the southwestern parts of Colorado,  clerking in the town of Ouray for 16 months.  Early in 1879, he had amassed enough money to begin his own general store in the mining boom town of Kokomo.  After only a short time there,  he took his merchandise to another boom town called Carbonateville.  There he entered a partnership with Frank Ralph, its postmaster.

Together with Ralph,  Bergerman moved again in 1880 to Robinson, Colorado, and ran a general store there until the late 1890s.  Sometime during this period,  Jake was joined in marriage to Esther.  They would have two children,  Sadie and Rose.   It should be noted  that the once boom towns of Kokomo, Carbonateville and Robinson today are all Colorado “ghost towns.”  Bergerman may have sensed that downward trajectory in Robinson and about 1898 moved to Salt Lake City where he opened a liquor store, initially located at 167 South Main Street. Although the company letterhead claims a founding date of 1874,  while Jacob was still an apprentice printer in Colorado, the Utah Liquor Company first shows up in Salt Lake City directories in 1898. 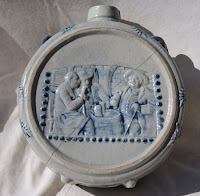 From the outset,  Bergerman does not appear shy about selling whiskey in the heartland of the Mormons.   Early on, for example, he issued a metal token good for 12&1/2 cents in trade at the Utah Liquor Co. that had an image of the Mormon Tabernacle on the reverse.  Bergerman also showed considerable imagination in the containers he chose for his liquor.  Among them are patterned molded gray canteens with cobalt decoration that depict on one side a scene of men drinking and on the other has the address of his firm.  Known in 1/4 and 1/2 gallon size, they were made by the White’s Pottery in far off Utica, New York.  During this early period he also commissioned a shoulder jug stenciled with stylized fleur-de-lis.  This jug was issued in 1/2 and one gallon sizes. 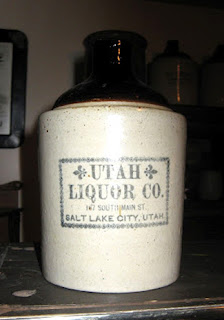 Bergerman seems quickly to have achieved recognition in the Utah business community as a canny operator.  During the early 1900s, he became the proprietor and manager of Calders Park, a well-known Salt Lake City recreational site and resort.  He ran a saloon on the premises where both boisterous parties and more respectable sorts, as the pair shown in this John Held New Yorker cartoon,  could have their leisure.   In 1904, he was awarded a lease to manage what the press called “an ideal pleasure resort” named “The Lagoon.” Hired by a regional railway company,  Bergerman was put on notice that his contract was dependent upon enforcing order among patrons and insuring that “all concessions in the shape of restaurants, bars, etc. must be conduct (sic) in first class manner.” 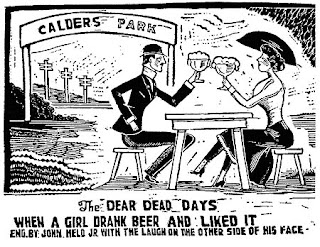 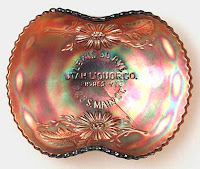 At some point in this period, probably 1903, Bergerman moved the Utah Liquor Company to larger quarters at 223 South Main,  the storefront seen in the photo.  At that location he also continued to bottle his liquor in interesting ceramic jugs,  even one with an error in the address of the Utah Liquor Company.  Of particular interest is a wide mouth crock that advertises Jake’s firm as “The Family Store.”  It bears the pottery mark of the Minnesota Pottery Co. of Red Wing.  In glass there were at last three clear highly embossed megaphone shaped cylinders denoting the Utah Liquor Company. Bergerman continued to advertise vigorously at the new location and took the “Lewis 66” brand of rye as his flagship label.  This was a whiskey from the Strauss-Pritz Company of Cincinnati, an outfit that was noted for its giveaways to dealers.   Bergerman is known to have featured three varieties of  carnival glass plates.

In addition to his business activities,  Jake was a member of a number of fraternal organizations in Salt Lake City.  They included the Elks,  and two orders of Freemasonry, the Free and Accepted Masons and the Royal Arch Masons.  He also was a member of Congregation B’nai Israel, which had been founded as a Reformed Congregation in 1891, according to a Jewish Heritage website.

Prohibition came slowly to Utah.  Prominent Mormons, despite the Church’s mandate against alcohol, feared that pushing the cause would erode their political base and revive the bitter clash between Mormons and non-Mormons in the state.  Continued attempts during the first two decades of the 20th Century to pass statewide “dry” legislation failed until 1917.  Ironically, it then was a colleague of Bergerman who pushed through the ban on liquor.  He was Governor Simon Bamberger, a non-Mormon, German-born Jew, and the man who in 1904 had awarded Jake the management  lease on the Lagoon resort.  About 1916, as his political career was being launched, Bamberger voluntarily stopped the sale of liquor at the Lagoon and offered to pay $1,000 to anyone who could prove he or she was a better prohibitionist.

On the first of August, 1917, the Governor signed a law making it a crime in

Utah to manufacture, sell or consume alcohol.  The local press estimated that the law would affect four thousand persons in Salt Lake City alone who were dependent on the liquor business.  Among them obviously was Jake Bergerman.  As the deadline approached,  liquor stores such as his sold their stocks at bargain prices. The Salt Lake Tribune estimated that hundreds of thousands of dollars worth of liquor had been so acquired and stored in the cellars of Salt Lake residents. 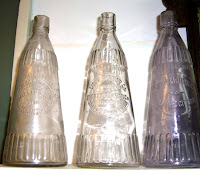 Now 61 years of age,  Bergerman was faced with the need for a new occupation.  Apparently having accumulated some wealth he ventured into real estate.  Records indicate that in 1923 he purchased the Bernice Apartments, located at the corner of 800 East and 100 South.  This was a major residential building that had been constructed in 1912 by a well-known local architect and builder named W.C.A. Vissing.  It remained in the Bergerman family through at least 1934 and currently is on the National Register of Historical Places.

In ensuing years Bergerman’s health declined and on September 14, 1928, he died at his home at 480 East Broadway in Salt Lake City. The cause of death listed by the county coroner was stomach cancer but he also apparently had been troubled by heart problems.  Jake was buried under the Bergerman marker at the B’nai Israel Cemetery, located within Salt Lake City.  Near him today lie the graves of his wife, Esther, and daughter Sadie, who never married.  Much of his legacy resides in his innovative merchandising of his whiskey which has provided modern collectors with a treasure of desirable artifacts. 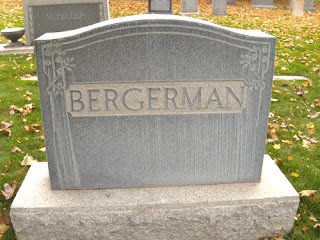 Note:  Although the information for this article was drawn from a number of sources, a key one was a 2003 article by Stan Sanders for Bottles and Extras, the journal of the Federation of Historical Bottle Collectors (FOHBC).  It provides details on Utah Liquor Co. collectibles.