The distinguished family into which Charles Wharton Jr. was born in 1816 could trace its roots back to Westmorelandshire, England, and early American colonialists who settled in Pennsylvania. His heritage included some of the most noted business and political figures in Philadelphia history. Yet this Wharton’s claim to fame was selling whiskey.   Because he did so in spectacularly colored bottles, most embossed “Chestnut Grove,”  his name today is considerably more familiar to bottle and glass collectors than to historians.

Wharton’s parents were Charles and Anna Maria Hollingsworth Wharton.  His father, like many of his ancestors, was a leading Philadelphia businessman.  Our Charles was the first of five children and given the best education available at the time.  His childhood was spent in very comfortable circumstances.   For example, he would have known summers spent at the idyllic Wharton country home, Bellevue Mansion, shown here in a painting.  Now on the historical register, the house is located in North Philadelphia, off Allegheny Avenue between North Marston and North Etting Streets. 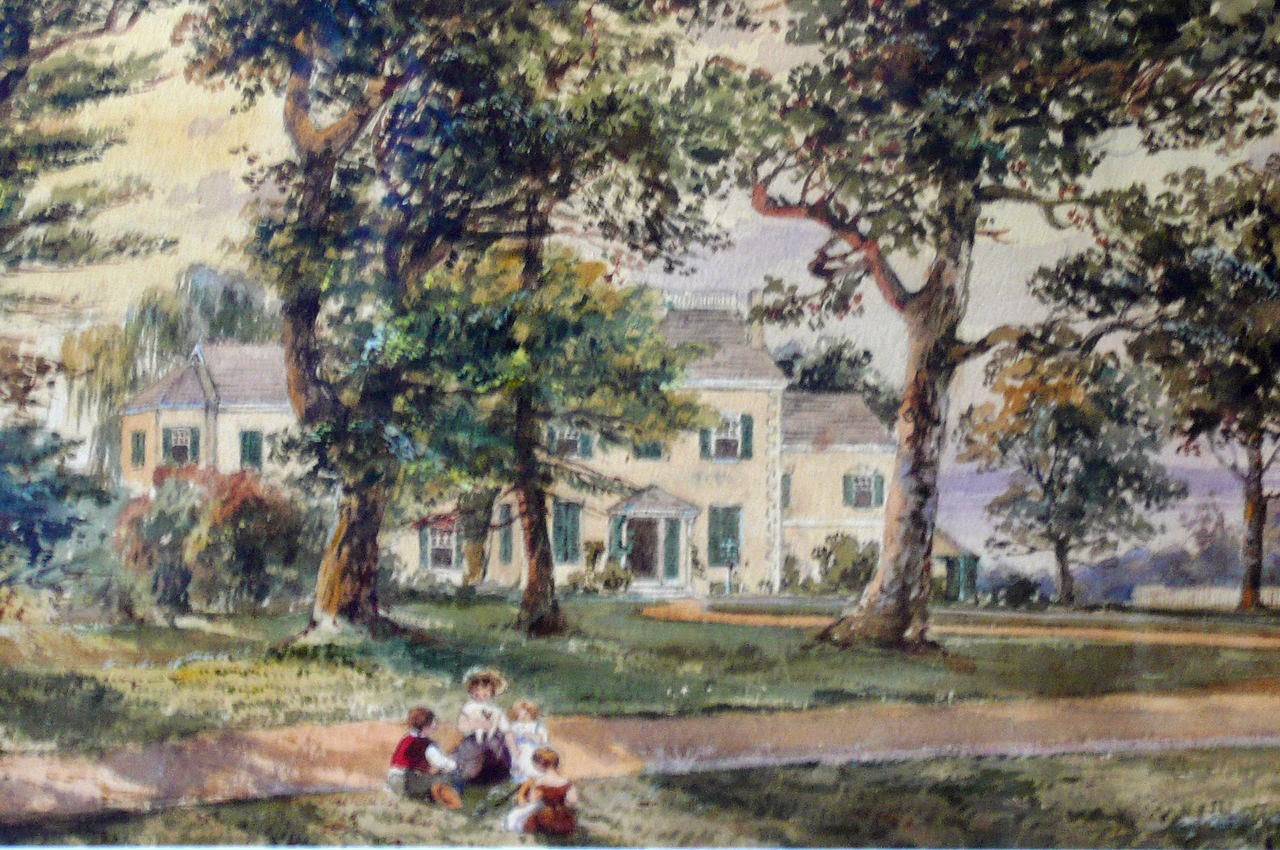 Wharton seems to have gravitated early in life to ventures in the construction industry and seemingly had a taste for big projects.  An 1837 exchange of letters exists between Charles and Richard Delafield, Captain of the U.S. Engineers, in which the young man sought to build a causeway to connect offshore League Island to the Philadelphia mainland.  Wharton also offered to build piers on the south side of the island to accommodate shipments of coal and other products and to facilitate transport directly into the city.  Delafield and other important figures endorsed Wharton’s plan and it ultimately was accomplished, to the credit of a man then still in his twenties.

Why this blue blood with big ideas for advancing Philadelphia’s economy ultimately turned his attention to selling liquor is something of a puzzle.  Gaps exist in understanding Wharton’s career path.  His father willed his estate to Charles Jr. and a brother with stipulations for the care of Charles Sr.’s grandchildren.  The bequest included parcels of real property that Charles likely managed.

We also know that in 1842 the Rev. J. T. Marshall Davie married Charles to Mary McLanahan Boggs.  Several years older than her husband, she was the daughter of a physician, Dr. John Boggs and his wife, Isabella.  The Whartons’ firstborn they named Charles but the baby died within two months. It may have been growing family obligations that spurred Wharton into the lucrative whiskey trade.  His fifth youngster was born in 1850, the year that the Charles Wharton Jr. Company claimed its origins.  When the firm first appeared in Philadelphia business directories in 1858, child number nine had arrived. A tenth — and last — baby followed a year later.

Wharton’s business address was 116 Walnut Street, a five-story building, shown here, where a sign announced “Chestnut Grove Whiskey,” and “Chas. Wharton Jr., Sole Agent.”  Not only was Charles the agent for this brand, he almost certainly was blending and compounding it from supplies of raw whiskeys obtained from the many Pennsylvania distillers of his era.  Unlike other rectifiers who fancied many brands, Wharton appears to have preferred to be the master of just one — Chestnut Grove. 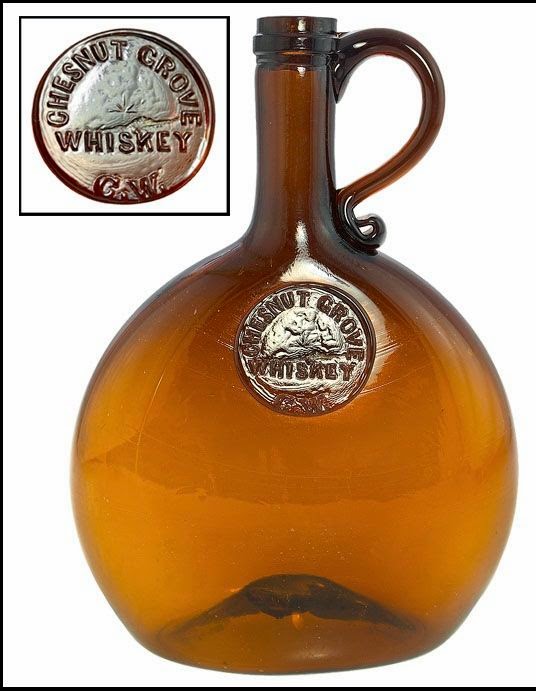 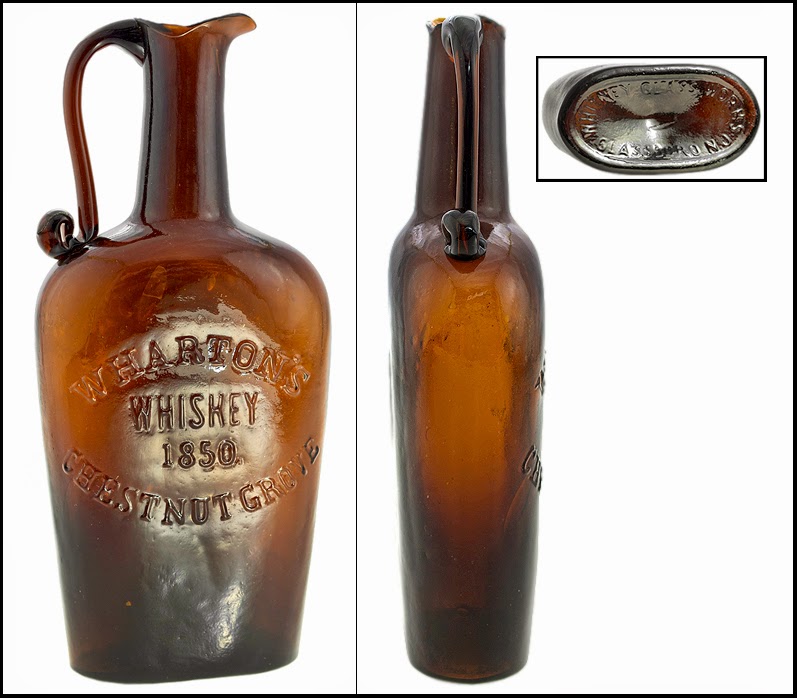 From the outset the proprietor had determined that a key to success was to package his whiskey in attractive glass bottles, often embossed with his name and the date of his founding (not the age of the whiskey).  An example shown left bears that label.  It is an unusual ewer-like container that appeals to collectors for its unusual shape and distinctive pouring lip.  Wharton also featured a round bottle, shown right, that carried  “slug plate” that read “Chestnut Grove Whiskey” and carried his initials.  Other distinctive Wharton bottles are on display below.  They include quart sized containers as well as “pumpkin seed” bottles with rounded bottoms.  All are notable for the richness of the colors in the glass. 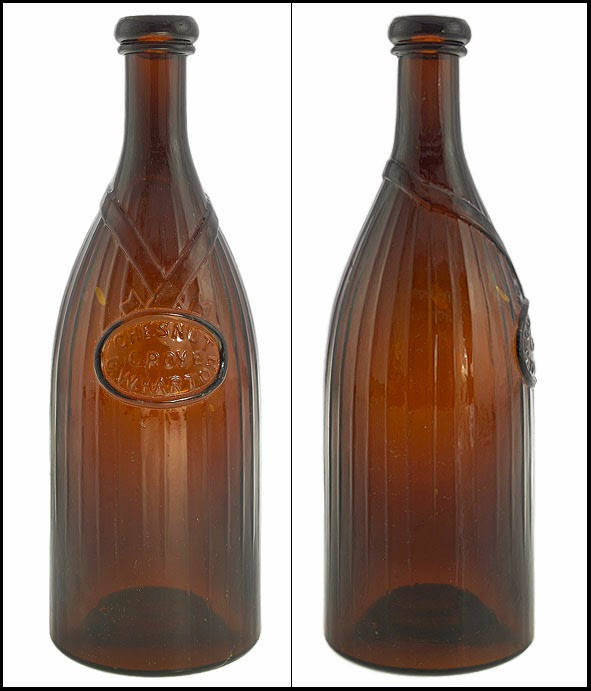 Their attractiveness is attributed to the New Jersey-based Whitney Glass Works, below. This company had been formed in 1838 when Thomas H. Whitney bought out an existing glassworks and renamed it, “Whitney and Brothers.”  Later Whitney’s two sons, Thomas and Samuel, joined their father in the business.  In time the company became known as the Whitney Glass Works and developed into an enormous operation, as shown in an illustration above.  The factory continued to make all varieties of glass from 1838 until 1929 when the invention of the bottle machine put glass blowers out of business.  During the 1850s and 1860s when Wharton engaged the company it was at its peak of perfection in the coloration of glass.  His appreciation of his bottles is evident in the letterhead that introduced this post, showing three sides of a glass jug. 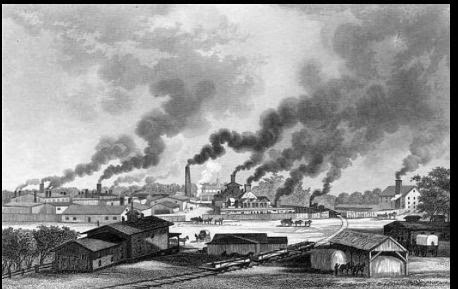 Wharton also was notable for the emphasis he put on the “purity” of his product.  Almost a half century before the passage of the U.S. Pure Food and Drug Act, he was advertising in medical journals like the one shown here that his Chestnut Grove Whiskey was the “purest diffusible stimulant that has ever been prepared for medical use.”  Its nutritious properties were preserved by a process solely his own, the ads claimed, so that all noxious ingredients had been removed.

He also offered testimonials from individuals said to be “the most eminent analytical chemists” of  Philadelphia, New York and Boston.  Philadelphia was represented by the firm of Booth, Garrett and Camac which testified that the whiskey did not contain “the poisonous substance known as fusel oil.”  James Chilton of New York said his testing showed that Chestnut Grove was “entirely free of any poisonous or deleterious substances.”  His endorsement was echoed by Dr. A. A. Hayes, the State Assayer of Massachusetts.   Author/collector Donald Denzin has commented:  “These testimonial, all from 1858, are actually quite subdued for the period. Notably they don’t say Mr. Wharton’s whiskey is good; they say only that it wasn’t bad.” 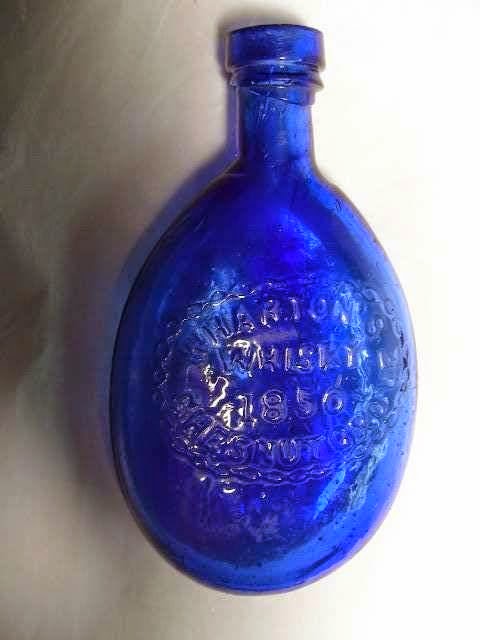 Given the number of Chestnut Grove bottles extant, Wharton’s whiskey must have been good enough to have found a substantial customer base.  His liquor dealership appears to have been in business for about 30 years.  Directories record a move from the Walnut Street address to 236 North Second Avenue in 1878.  That change may indicate some diminution of business. The building that still stands at that address is only three stories and considerably smaller than the Walnut Street structure that served Wharton for 28 years.  All directory references to the company end in 1880, when the proprietor would have been 64 years old.  One can speculate that his advancing age and the possible lack of a successor among his children caused him to shut the doors on his Philadelphia establishment.

Wharton died on July 10, 1886, about a month short of his 75th birthday.  By that time his wife, Mary, and four of his children had died, leaving six progeny to mourn his death.  He was buried in Philadelphia’s Laurel Hill Cemetery alongside Mary.  Unlike many of his ancestors whose lives have been chronicled by historians of Philadelphia, the record is relatively silent about Charles Jr.   This Wharton is remembered primarily through the rich trove of glass jugs, flasks, decanters and other bottles he has left posterity as the “Master of Chestnut Grove.” 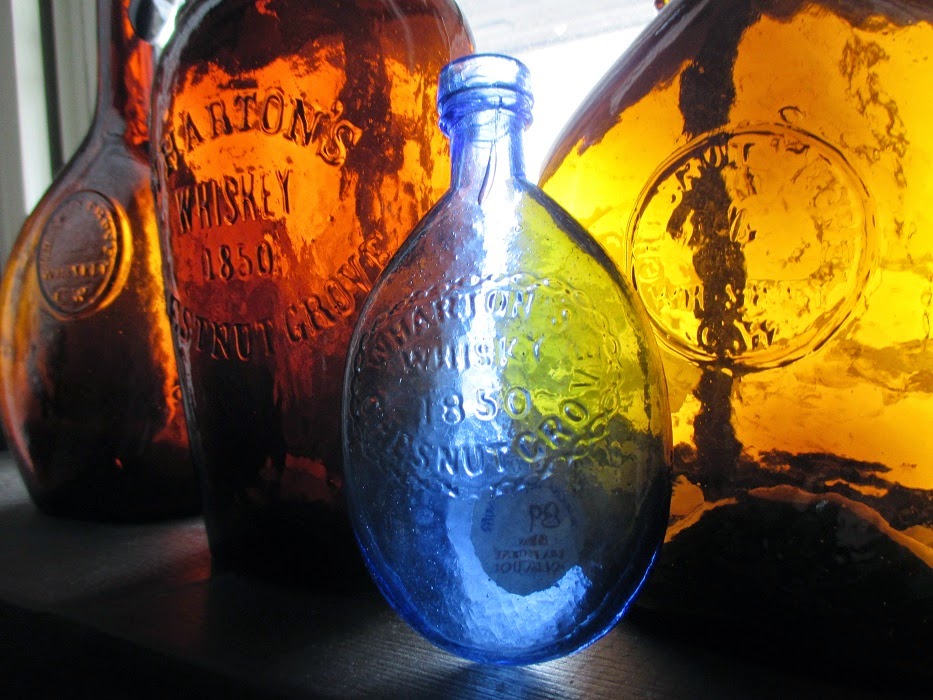 Note:  The examples of Chestnut Grove bottles shown here are principally from the Peach Ridge Glass website of Ferdinand Meyer V, current president of the Federation of Historical Bottle Collectors.