Note:  Since this post was first written, two persons have been in touch to say that they believe that there may have been two Louis Taussigs in San Francisco at the same time and that the "Mormon" Taussig I had identified was not the SF whiskey man. Their commentaries are below.  As a result of materials subsequently received from a Taussig descendant, I have revised this post (9/8/15).

My belief is that “Everybody Has a Story.”  Researching Louis Taussig seemed to reveal more than just a story. From evidence it appeared that Taussig was a Jewish immigrant from the Czech part of Bohemia. Upon arrival in America he converted to the Mormon religion, had three wives simultaneously in Utah, and fathered at least three children before decamping to California for a new life, a new wife, and riches selling whiskey. There was another Taussig, Ludwig, who often went by the name "Louis" and descendants believe he was the San Fran whiskey man. 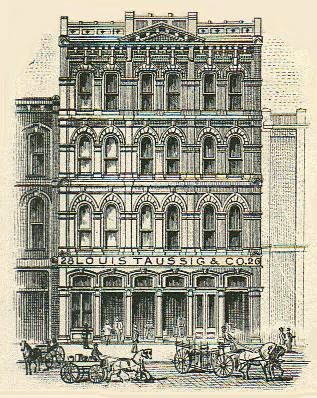 Here is what the record indicates about the liquor dealer.  Arriving in San Francisco at an undetermined time, a man named Louis Taussig claimed in his newspaper ads to have been in business since 1856, an unlikely date. For a while he worked with the liquor firm of Louis Altschul Co. and ultimately bought the firm.  The origins of that firm may provide a clue to the earlier date.  Louis Taussig & Company, Importers and Wholesale Liquor Merchants, first surfaced in San Francisco business directories nine years later, in 1865.  It was located at two successive addresses on Sansome Street from that year to 1872.  As Taussig’s business expanded, he moved frequently, serially to two addresses on Battery (1873-1883) and then to 26-28 Main Street, the building shown here.

Although claiming to own a distillery in Covington, Kentucky, called “White Elm,” my research does not reveal any such facility.  The Latonia Distillery was a large Covington distillery that did business under numerous guises, possibly among them “White Elm.”  Regardless of where he was getting his raw product, Taussig was a rectifier, that is, he was blending and compounding whiskeys from multiple sources to achieve a desired smoothness, color and taste.  Like many rectifiers, he featured a wide number of brands, including "Elk Run,” "Game Cock,” "Game Cock Bourbon,” "Gold Spray,”, "Mascot C.C.", "Old Hoss Pony Whiskey,” “P. Morville  AAA Old Bourbon Whiskey,” "Rose Bouquet,” "The Major Bourbon,” and "White Elm.”  He seems never to have trademarked any of these labels.

The Taussig Co. soon became one of the largest wholesale liquor outfits in the West, eventually opening offices in Cincinnati at 15 Sycamore Street, and New York City at 9 Delancy Street.  Those outlets gave Taussig access to markets nationwide. He also had an eye for packaging his goods attractively in embossed glass.   The “Grand Prize Bitters” bottle shown left recently sold for $1,000. 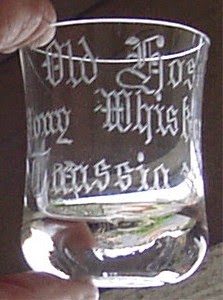 Just as Taussig seemed intent on moving the location of his San Francisco business every few years,  he also reorganized his management structure with some frequency.   In 1873, he created a partnership with two local businessmen, Adolph Fried and Adolph Eisenbach, possibly to tap additional financial resources for his company expansion that year.  Not long after he brought into the management structure two men whose name also was Taussig, likely close relatives.  One was Gabriel Taussig, born in Prague in 1830; the other was Edward, born there in 1825.  Soon Gabriel’s two sons, Rudolph and Hugo, were employed at Louis Taussig Co., Rudolph working as a traveling salesman. 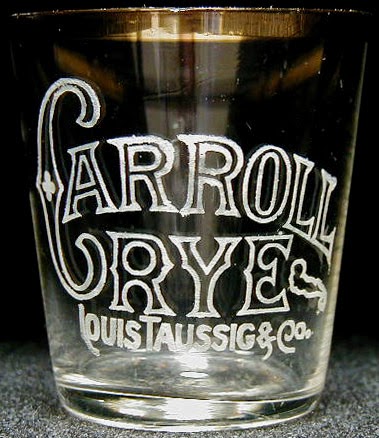 Having achieved considerable wealth, Taussig apparently tired of the whiskey trade and in 1886 bowed out of the firm that continued to bear his name.  Becoming involved in real estate, he maintained an office at the firm’s Main Street store, now being run by relatives. 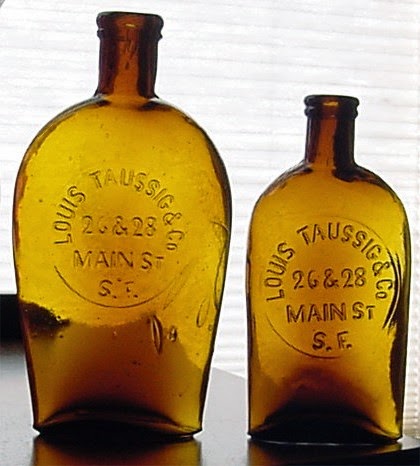 My research unearthed a man we will call the "Mormon" Taussig. Church records show that this Louis was born in the Bohemian (Czech) part of the Austro-Hungarian empire, the son of Rafael Taussig and Catherine Levi.  The date of his birth remains in question. He told U.S. census takers in both 1880 and 1900 that he was born in 1837.  His Mormon biography gives the year as 1819, a startling 18 years earlier, but adds:  “The birth date…is the date Louis himself gave at the time he received a Church ordinance.”   Taussig’s statement likely was made when he was baptized a Mormon in 1853.  The date of Taussig’s immigration into the United States also has not been established.  Sometime after 1847 he appeared in Salt Lake City with a woman he called Mary Aspin Taussig.  “Presumably Mary was Louis’s wife,” commented a Mormon biography. 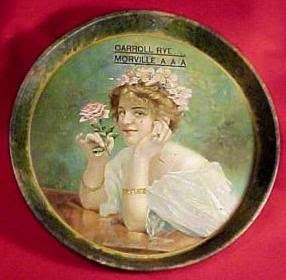 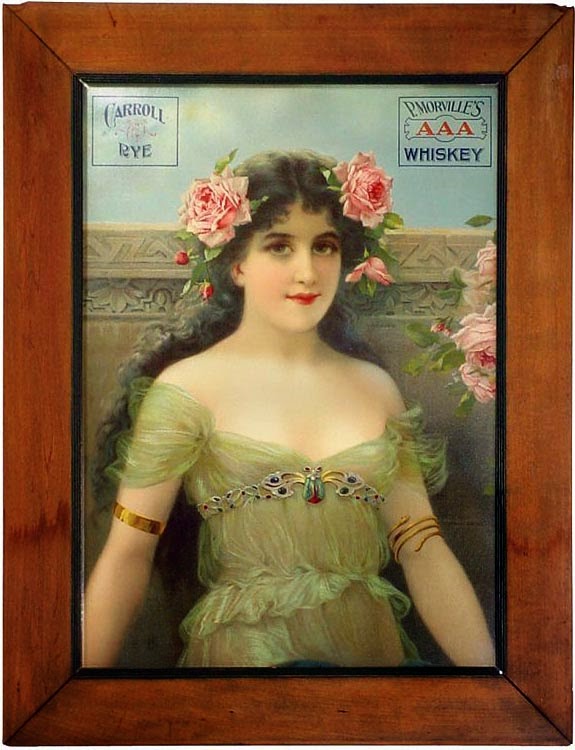 If the alluring female images on his signs and  tip trays are an indication, Louis may have been drawn to Utah because of the Mormon practice of polygamy.  It was in Salt Lake City, in addition to Mary, he wed Sarah Houston Pratt.  One writer described her thus:  “She was a strong and noble character, being large in stature and of a very kindly disposition.” Sarah also was the widow of Parley Parker Pratt, an early adherent of the Church of Latter Day Saints, often called “The Apostle Paul of Mormonism” for his energetic promotion of its doctrines.  Also an energetic polygamist, Pratt was murdered in May 1857 by the estranged husband of his twelfth wife.  He left behind 30 children, with descendants estimated to number today as many as 50,000.  This Apostle was the great-great grandfather of Mitt Romney.

Among Pratt’s children were four from his marriage to Sarah, a ceremony conducted by no less than Joseph Smith himself.  In October of the year of her husband’s death she entered into a polygamous marriage with Taussig, at the time reportedly running a tannery business in Salt Lake City.  The couple would have an additional three children, two boys and a girl, born from 1858 to 1862.   Louis also added a third woman to his entourage.  She was Rebecca Reed Catlain, a woman who had emigrated to the U.S. from England.  She first married a French Canadian Mormon named John Catlain.  After he was killed by marauding Indians in Utah, she wed Taussig, the event recorded in 1857.

Then suddenly Louis Taussig was gone.  One account says he disappeared during an Indian raid.   Another author seems simply to dismiss him as having run away.  He left behind in Utah wives Mary, Sarah, and Rebecca, and seven children, three of his own making.  Did Mormonism not suit him?  Or the demands of three wives?  Or the needs of seven children?  My initial belief was that Taussig lit out for California.  The timing of these events suggests that he could not have arrived in San Francisco until late 1862 or 1863.

Once there he showed no hurry in contracting another marriage as he built his whiskey empire.  In the meantime both Sarah and Rebecca either divorced him or assumed him dead, and married again.  Mary Aspin Taussig faded into the mists of time.

Now comes Lesley Wood, a descendant of Ludwig/Louis Taussig who has done considerable genealogical work on the family.  Her relative was the San Fran whiskey man, she contends, and offers this evidence:  If you have access to ancestry.com, you can find the naturalization record for Ludwig Taussig,1861, in New York, witnessed by Gabriel Taussig -- both living at same address. The next available ancestry record is 1868, when Ludwig is in San Francisco, listed in the Voter Register, occupation Liquor Dealer, address Sansome St. The name "Louis" is then used in the 1870 census -- San Francisco, Ward 2, occupation wholesale liquor dealer.

Unfortunately, it doesn't appear that the census gave the residential address for any entries in 1870; however, the ages are consistent and the occupation is, I think sufficient evidence it is the same man. Most of Louis' subsequent records (like census) use the name Louis. An exception is a passport application for 1889, for Ludwig, wife and daughter; I think he must have thought back to his naturalization record and decided best to use his given name Ludwig, to be consistent. (I do have the ship's manifest for Louis, Annette and Alice returning to US from a trip in 1890).

So, based on this, and also on the info I've attached, I am confident Louis was the anglicized version of Ludwig, "our man's" given name. He may have found Louis was simpler to use, or he may have encountered prejudice with an obviously German name -- who knows? A number of my ancestors changed their names in the 19th C.

Ms. Wood makes a good case for Ludwig/Louis.  But what then of the Mormon Taussig?  Was he also in San Francisco but not in the liquor trade?  Or was he killed in an Indian raid and never went West?  I am hopeful that time and more research will sort out the Taussig saga more definitively.

Posted by Jack Sullivan at 6:16 AM