How the Baetzholds Bloomed in Buffalo 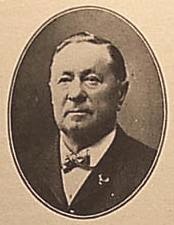 August Baetzhold spent much of his early life in Germany and in the United States earning a living with hammer and saw as a carpenter.   Beginning in 1862, however,  August used other tools to construct a liquor establishment that lasted more than half a century, had a nationwide reach, and thrust the family into the forefront of the business establishment in Buffalo, New York.

Born near Bad Langenfalza in the State of Saxony in 1833,  Baetzhold as a youth apprenticed as a carpenter and joiner.  Leaving Germany at the age of 19 in 1852 he settled immediately in Buffalo, where he may have had relatives. While working in the building trades there he met and married a woman named Esther. The couple’s first child, August, Jr., was born in 1859, followed in quick succession by Theodore (1860), Emilia (1863), Albert (1864) and George (1867). 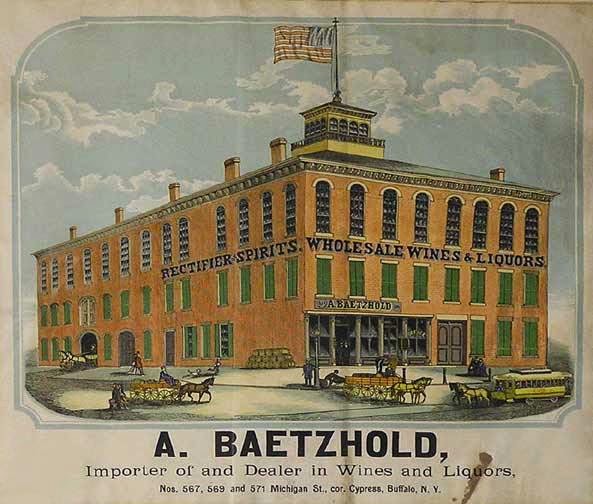 Perhaps recognizing that his growing family required more resources than carpentry could provide, in Baetzhold opened a small liquor store on Main Street in the Cold Spring District in 1862.  Proving to be extraordinarily able in the whiskey trade, his business grew rapidly and by 1870 he was forced to find a larger venue, settling into retail space at 346 Ellicott Street.  That also would prove to be too small and within two years Baetzhold had purchased the Odd Fellows Hall, remodeling it from the ground up. His construction skills insured its long-term utility.  Shown here,the three story building at 567-571 Michigan St., cor. Cypress, would be the headquarters for the family business for the next 48 years.

As the signage on the side of his building boldly proclaimed, A. Baetzhold was a “rectifier of spirits,”  that is, blending and compounding whiskeys from a variety of distillers to create his own desired taste and smoothness.  At wholesale he sold this liquor in large “beehive” shaped stoneware jugs, with his name imprinted on them.  These would have been decanted by saloon customers and served over the bar.  Baetzhold also featured his own proprietary brands.  They included “Deer Run,” “Santa Fe,” and “Gold Coin.”  He trademarked the first two in 1905 and the last in 1906.  He also featured an alcoholic remedy called “Dr. Capias Herb Bitters” and was the local agent for “Sloman’s Diamond Wedding Pure Rye.”  He gifted saloons with reverse glass signs and tip trays that advertised several of these brands. 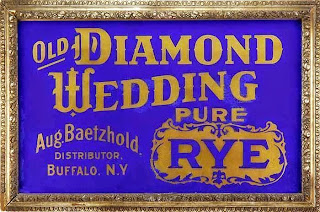 As his business burgeoned, August faced a personal setback when his wife, Esther, only 38 years old, died in 1869, leaving him with five children under ten to care for.  Curiously enough, his biography in a 1912 book called “Buffalo and Its German Community” fails to mention anything about her death.  Nor does it mention his having married a second time, as indicated by U.S. census records.  Both the 1880 and 1900 census show Baetzold as having married a woman whose name was given variously as “Mary” or “Anna M.”   The 1900 census data indicates that the couple wed in 1870, about a year after Esther’s death. No children were indicated from this union. By 1910, this second wife had died. 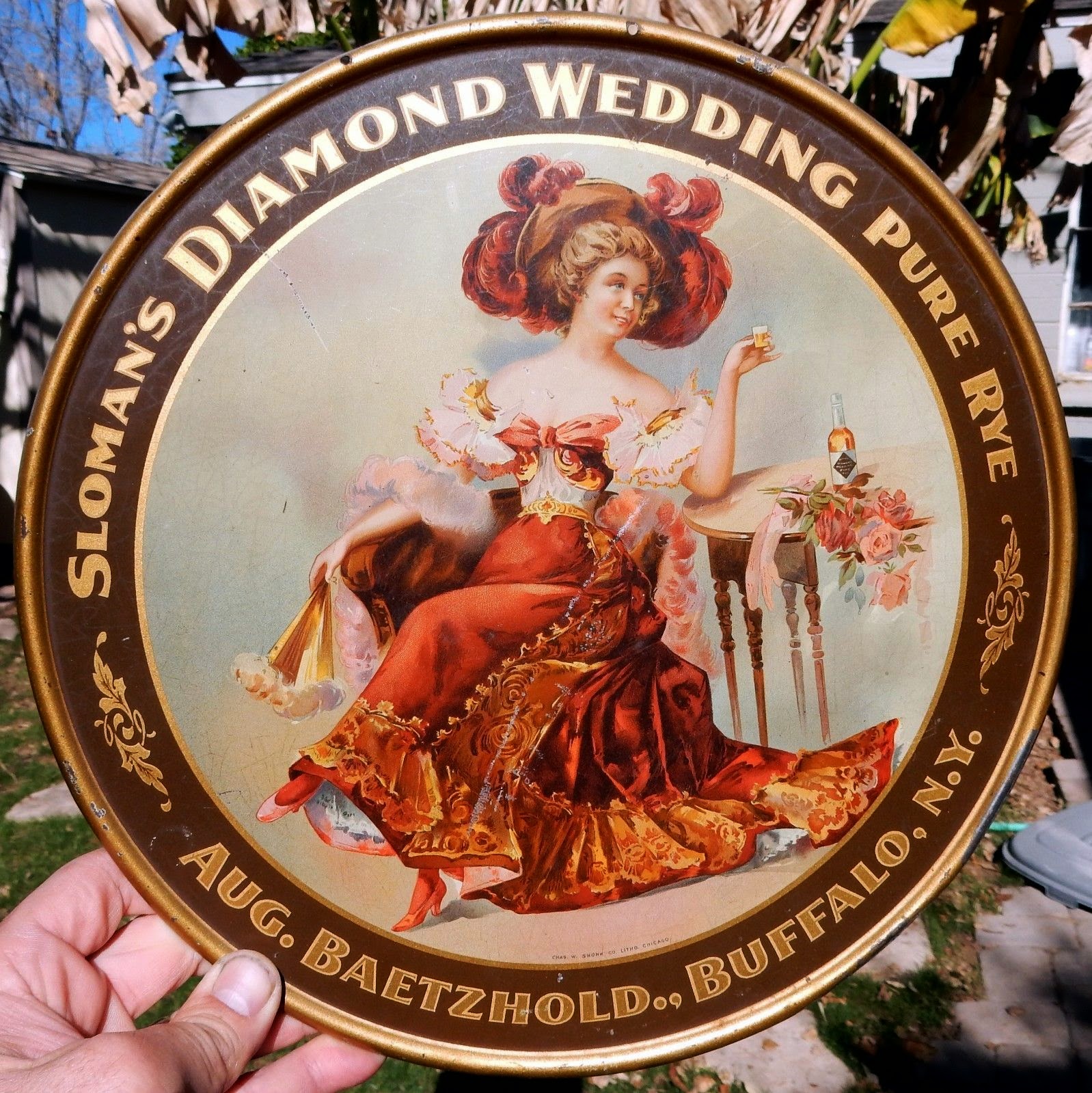 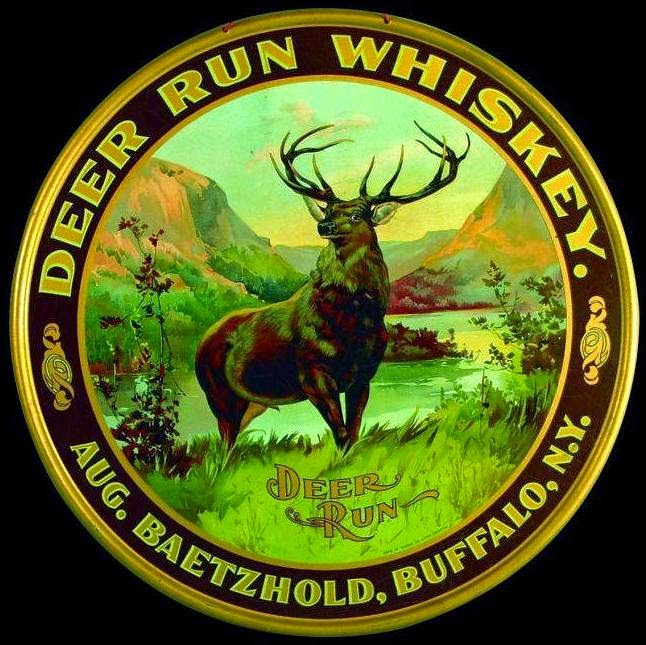 Another sorrow occurred in 1895 when Baetzold’s third son, Albert, died suddenly.  A news account reported:  “He went into the street in a heated condition after a contest in a bowling alley, caught cold, and was carried off by pneumonia in two days. He was 31 years old, nearly 6 feet tall, weighed 180 pounds, and had the red cheeks of a girl.”

Despite these personal tragedies August seems to have continued on course.  With the success of his business came recognition from fellow Buffalo residents.  In 1877 he was elected to a term as a Buffalo alderman from his (then) Sixth Ward.  He became a director of the German American Bank and a director of the Excelsior Brewery.  He was elected State Treasurer of the New York Wholesale and Retail Liquor Dealers for many years.  August also had vigorous social life, deem a prominent member of the Maccabees, a Canadian founded fraternal organization; the Buffalo Orpheus, a theater group; Sangerbund, a German choral society, and the Gymnastics Club. 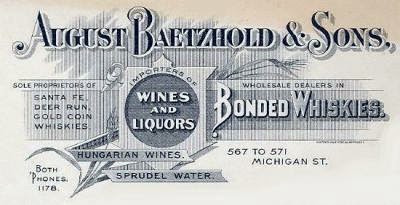 Baetzhold was devoted to his family.  As his boys matured, one by one he introduced them into the business.  A Buffalo directory for 1893 showed three of his sons working in his wholesale wine and liquor business — August Jr.,  Theodore and George.  Eventually a grandson, August C., would join the firm.  In 1908, recognizing the family affair his company had become, the father changed its name to “August Baetzold & Sons.”

August Jr., shown left, seems to have been groomed by his father for top management.  Said to have been a “chip off the old block,” he had been given a good education before joining the firm.   Theodore, at right, may have left school early to go to work with his father. He became a traveling salesman, reputed to have introduced the firm into new territories and increased its customer base throughout the U.S.  George's role was undisclosed.

Under the new organization name, the Baetzolds continued to pursue the same merchandising course as had proved successful in the past.  Now, however, the stoneware jugs in which they wholesaled their liquor had shed the beehive look for the more practical and cheaper “shoulder” jugs, as those shown here.  They also continued the tradition of providing attractive give away items, such as the reverse glass saloon sign below that advertises all three major Baetzold brands. 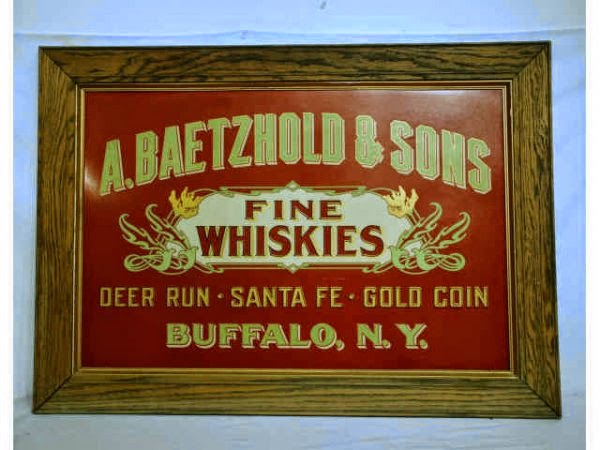 In  January 1911, August Baetzhold Sr, died and was succeeded by his eldest son as president of the company.  The book “Buffalo and Its German Community” in 1912 said of August Jr.:  “Today he is considered among the most respected citizens and businessmen in the city.  He is well liked and esteemed in all he circles in which he travels.”   August Jr., was a joiner like his father, with membership in many of the same German-oriented groups to which his senior belonged as well as in local, state and national liquor dealer associations.  In addition he was said to be a “prominent” Free Mason.  This Baetzold too would know heartbreak.  About 1882 he had married Natalie Kuster and with her raised a family of four children, two girls and two boys.  Just a few months before his father passed in 1911, Natalie died at the age of 53.

Meanwhile, during times “off the road” selling Baetzhold whiskey, Theodore also had a personal life.  In 1886 he married Jenny Hitschler.  They would  have two children.  He too made his mark in Buffalo,  being a member of the same German-oriented groups as his father and brother as well as a member of the Fraternal Order of Elks.

Two years after their father’s death, reflecting the new management structure, the brother changed the company name for a third and final time to “August Baetzhold’s Sons.”  Artifacts can be found that bear all three names, allowing them to be dated more precisely.  The sons also briefly opened a second Buffalo outlet at 567 Washington Street.

Already with years of experience in the wholesale liquor trade the brothers found no difficulty in maintaining the reputation their father had built. The book cited above enthused about the Baetzholds’ Rhineland and California wines, and called their liquor “first class goods.”  It ended its biography of the family by stating:  “The firm of August Baetzold & Sons is built on strictly honest business practices and it is one of the largest and best known firms of its kind in this part of the country.”

None of those attributes obviously mattered when the advance of alcohol prohibition advanced across America, cutting off sales locality by locality and state by state.  When National Prohibition became inevitable, the Baetzholds shut the door on their enterprise of 56 years in 1919. 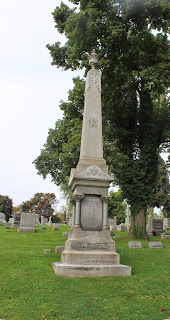 The Baetzhold brothers lived to see Repeal.  August Jr. at age 77 died in 1937 and Theodore, age 79, in 1945.  Both men are buried next to their wives in the Forest Lawn Cemetery of Erie County, in adjoining plots.  Nearby is the grave of their father,  August, and Esther, his first wife and their mother.  Shown here is the elaborate monument that stands over their interments with the Baetzhold name at the base and the monogram “AB” on the shaft.

Note:  Much of the information here was derived from the book cited above, “Buffalo and Its German Community.”   This was an illustrated text, including photos of the Baetzholds, published by the German-American Historical and Biographical Society in 1912.  Originally published in German, it has been translated and made available online by Susan Kriegbaum-Hanks.

Posted by Jack Sullivan at 7:55 AM