The Shooting of B. B. Dillard: Accident or Suicide?

Below the headline here, datelined December 15, 1909, is the story of B. B. Dillard, a well known Roanoke, Virginia, whiskey dealer and civic leader.  At the age of 40, in front of his wife of only four months, he had shot and killed himself.  Was it an accident, as she insisted, or had he committed suicide?   The event is worth exploring.

Dillard was born in November 1868 in Southwestern Virginia, to Alfred Terrell and Sarah Jane Brosius Dillard.  His parent christened him with the startling given names of “Burger Brosius.”  Little wonder that he preferred to be called “B. B.” throughout his adult life.  The Dillards had five children, all boys, but clearly had not run out of standard names when Burger Brosius came along.

The 1880 census found the family living on a farm in the hamlet of Bonbrook in Franklin County, Virginia.  At 12 years old Dillard was in school, where he must have faced teasing over his unusual name.  During his early manhood he appears to have gravitated to the county seat, Rocky Mount.  Named for a steep cliff near the town, Rocky Mount had been founded by English colonists around 1760 who established a courthouse soon after the Revolutionary War.  During the Civil War numerous planter families sought refuge there, bring their slaves with them.  Confederate General Jubal Early was born on a nearby farm as was Booker T. Washington, the first major leader of African-Americans.

Although B. B. Dillard’s activities during his years in Rocky Mount go unrecorded, my speculation is that he was engaged in the mercantile trades while keeping a hand in farming. It was in Rocky Mount that he met and married his first wife, Estelle.  She had been born about 1871 and was slightly younger than B.B.  Although his obituary says that this couple had several children, I have been unable to find census or other data on their identities.

About 1888, Dillard decided that he needed a larger town to satisfy his ambitions or perhaps to finance his growing familial responsibilities.  As a result he moved his business and family to nearby Roanoke, Virginia.  His move was well timed.  To provide the junction of the Shenandoah Valley Railroad and the Norfolk and Western tracks,  rail executives chose a small village named “Big Lick.”  Recognizing the benefits conferred by this development, grateful citizens renamed the town “Roanoke,” coinciding with the river that passes through it.  Within a short time Roanoke became 20 times larger than Rocky Mount and the commercial hub for all of Southwestern Virginia. Inhabitants called it, “The Magic City.” 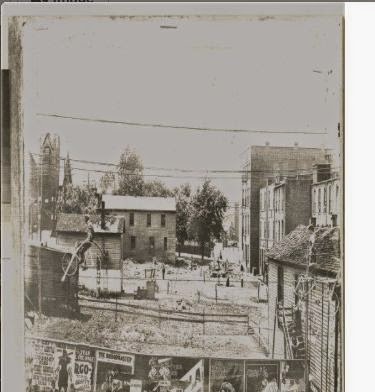 A major source of trade was selling whiskey — two ways.  First, a thirsty populace inhabited Roanoke so that saloons proliferated.  Second, the railroads made it possible to send liquor by express mail north and south, east and west.  Given a proliferation of distillers in the Virginia mountains (many of them legal), supplies were plentiful.  Dillard saw the opportunity and established a wholesale liquor store downtown on Salem Avenue, the street shown above.  In addition to his Salem Avenue store, Dillard owned a livery stable on West Court Street, having bought the Walter L. Young Livery & Feed Store, the ownership recorded on 1898 and 1902 Sanborn fire maps.  Dillard’s saloon was located near the stables.

The photo above captures the interior of Dillard’s liquor store, indicating that it was a substantial establishment.  The place featured a potbellied stove for heat and gas lamps for light.  Note the row after row of bottles on the shelf on both sides of the aisle.  On the left at back are barrels full of whiskey with spigots to fill stoneware jugs that can be seen on the floor.  My guess is that the gent with the long coat, bow tie and mustache at far left is Dillard himself. 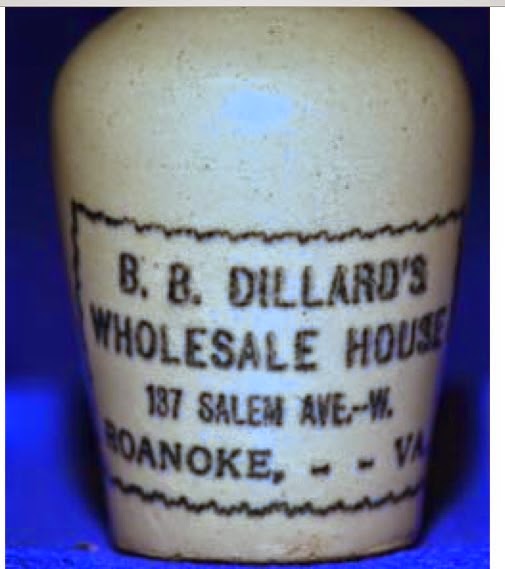 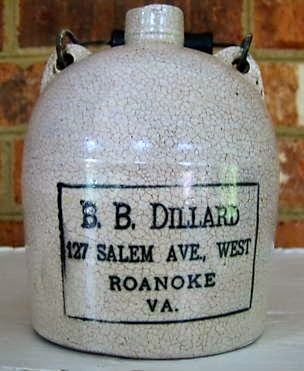 Although the jugs seen in the photo are of one and two gallon size, Dillard also sold his whiskey in smaller containers, such as the quart bail jug shown here.  He also provided whiskey in small amounts for giveaways to favored customers or perhaps as salesman samples.  Both his large and smaller stoneware have an underglaze transfer label that identified them as from B. B. Dillard at 187 Salem Avenue-West.   Just as mini jugs were a popular way of advertising in Roanoke among the whiskey trade, so were shot glasses, probably gifted to saloonkeepers and barmen.  Dillard’s were among the most ornate, featuring gold rims, elegant design, and deep etching.  All were gifted with the whiskey man’s compliments and messages such as “Liquor Dealer” and “Fine Whiskey.”

In 1904, tragedy struck the Dillard family.  Estelle Dillard, only 33 years old, died.  B.B. was left with small children to raise.   As great a sorrow as this may have been, he did not immediately remarry but appears to have thrown his efforts into his work and community development.  In 1906 Dillard was part of a local group of businessmen and investors who sought a charter from the Roanoke City Council to build an electric railway in the city.  They were successful and in 1907 the Roanoke Traction Company was incorporated, capitalized at $40,000 ($1 million today).  Dillard was named a member of the board.  During this period he also was investing in Roanoke area real estate. 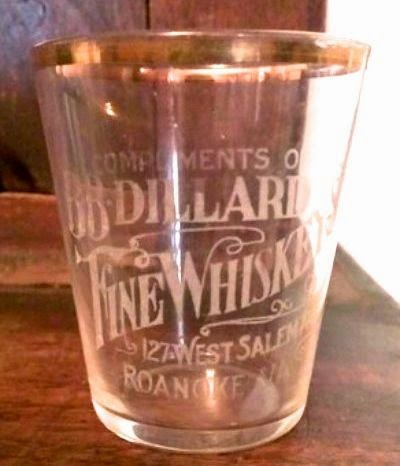 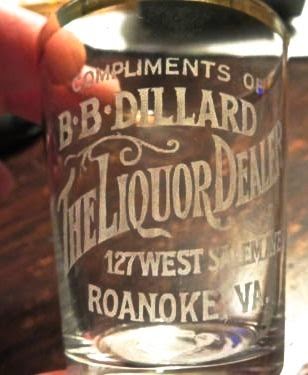 The following year he was a member of a group of Roanoke whiskey dealers who complained to the State of Virginia Corporation Commission that the Southern Express Company, the principal shipper in that part of America, was refusing to take their mail order whiskey into three far western Virginia towns that had voted themselves “dry” under local options laws.  It was still technically legal to ship liquor into such localities but express agents who did so frequently were targeted for arrest by local authorities.  Although the State Commission ruled in favor of the liquor dealers, Dillard sold his liquor store the following year, likely sensing the onrush of prohibition in Virginia.

In 1909, five years after Estelle’s death,  Dillard married again.  His second wife was Nannie Carrie Flagg, the daughter of Lucius Comee Flagg and Everline Walker Franklin.  Nannie was 23 years of age, he was 40.  Whether this age differential played any part in what occurred is unknown.  What is known is that on December 14, 1909, B.B. went home and shot and killed himself in the presence of Nannie Carrie.  They had been married only four months.

There seems to have been little reason for a suicide.  His obituary noted that he “had been successful in real estate and had amassed a fortune.”  His investment in the electric railway also seems to have been rewarded.  The Roanoke Traction Company was successful and within a few years was building inter-urban railway lines not only in Virginia also in North Carolina. Friends who had seen him the evening before his death declared he was in a happy mood. Finally, his widow was adamant that the shooting had been an accident.  Nevertheless, press accounts hinted at suicide.  In the end, it is impossible to know. 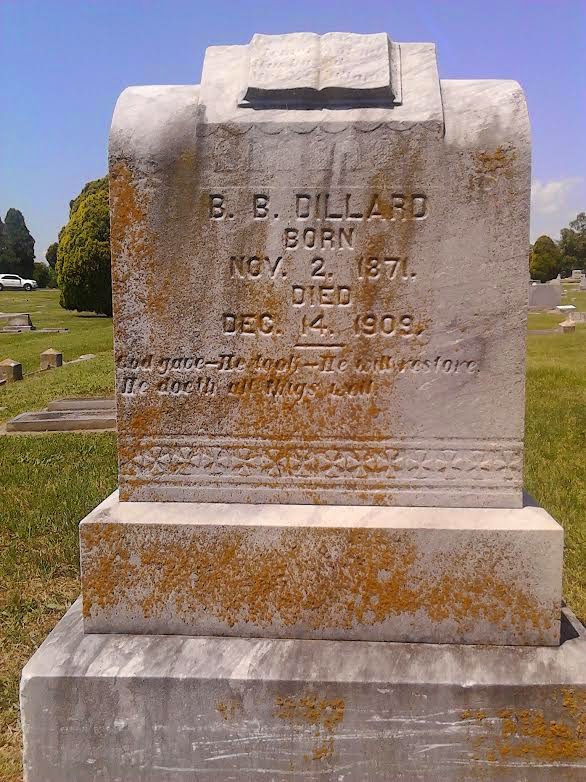 Dillard was buried in Fairview Cemetery, not far from where his first wife, Estelle, was interred. Both tombstones are shown here.   B.B.’s memorial stone at right does not give his full name, just the initials he preferred.  Of interest is the inscription etched in the stone:  “God gave—He took—He will restore.  He does all things well.”

Nannie Dillard, however, had one last surprise for the people of Roanoke who were buzzing over these events.  At the time B. B. died she was three months pregnant.   In July of the following year the Widow Dillard gave birth to a boy.  With a full range of names available to her, almost unbelievably, she had him christened “Burger Brosius Jr.”  (His friends called him “Bill.”)